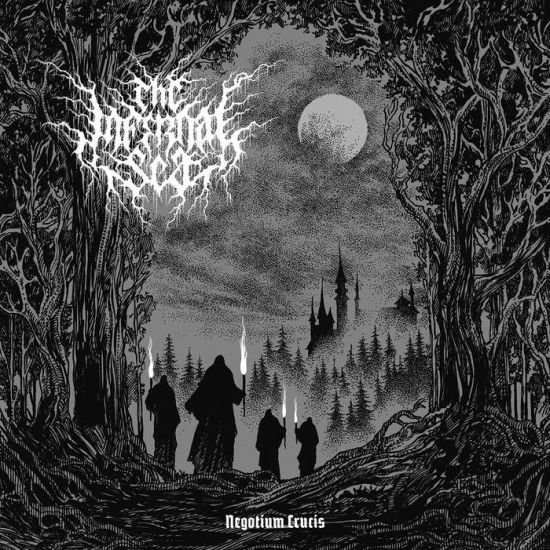 A great artwork can be the first indicator for a splendid album and the cover of Negotium Crucis is definitely outstanding. It’s a picture which makes me curious and it fits the style of The Infernal Sea who window-display their third full-length here. But a great visual attractiveness can be the overture to a major disappointment too. Of course, the anxious question is: can the music keep the promise the artwork made?

The opener raises serious doubts about this. Despite its furious right-in-your-face beginning, its density and Dark Funeral on drugs brutality, 'Destruction of Shum' cannot fully convince with regard to its stupid “oooh-ooooh” choirs that start silently, but gain the upper hand during the song’s last minute. I am not a bitter enemy of Pagan metal, but it is also not my favourite metier. I always see long beards in my mind's eye and am probably jealous because my beard growth for the past 40 years is comparable to that of an eleven-year-old Southern European lad. Another topic please!

The Infernal Sea recover quickly and already 'Befallen Order' brings the band back on track. The British squad attacks with uttermost cruelty, but it does not neglect the necessary amount of melodies. The guitars develop an almost lethal effect and I start to appreciate the style of the band. It gives English blackness a further note. It does not possess the excessive opulence of Winterfylleth and maniacal shrieking of pseudo-erotic or vampire-affine lyrics to keyboard-flushed rhythms is alien to him. The Infernal Sea bundle merciless guitar lines, flexible yet always powerful drumming and a passionate, hateful and raspy voice with the result that some songs belong to the best the British Island has ever spawned in terms of blackness. The aforementioned 'Befallen Order' is great, the mid-paced, partly hymnal and constantly relentless 'God Wills It' is another killer that makes us forget the weaknesses of the opener and more songs could be mentioned here. However, the absolute peak is reached when it comes to the title track. Every note is right here. A fantastic intro riff forms huge verses, which transition into a new melody, a great bridge. The guitar combines a lot of what black metal is about: austerity, totalitarianism, hardness and darkness. The initially not overly fast piece tightens the reins in the middle. A dark, instrumental swirl develops before the opening riff takes control again and leads a masterpiece of (British) black metal into the home stretch - although I don't want to neglect the gurgling vocal solo at the end. The Infernal Sea are unquestionably capable of great deeds, even if, for instance, the somewhat overlong 'Field of the Burned' is strong but not outstanding.

The almost painfully frontal mix gives the full-length an additional gruesome touch and the only thing I really miss here is the bonus track 'Into the Unknown' – noted on the back of the digipak, not present on the CD. (Assholes!) Nevertheless, more than 46 minutes guarantee an appropriate black metal session that does not lack ferocity, tremolo picking and an apocalyptic aura. 'Rex Mundi', equipped with a raging first half (driven by an insanely fast snare drum) and a more lamenting second part marks a proper closer for this devilish piece of music. And the artwork, that’s for sure, did not promise too much.

The UK black metal scene has had a surprising surge of notoriety in recent years and has widely been praised for how varied and diverse all the bands are that came out of that scene. With bands like Winterfylleth and A Forest of Stars, however, (unlike those bands which are know for their folky and psychedelics approaches) other bands reclaim the classic sound of black metal, alongside the classic British heavy metal spirit as is the case for East Anglia cult, The Infernal Sea.

The Infernal Sea have slowly made a name for themselves in the underground and not just because of their plague doctor get ups. The band has had a fascinating musical evolution, starting with a straightforward but no less venomous style of black metal in their debut Call of the Augur, refining that venom with a ghoulish melodicism and somber atmospherics in their second record The Great Mortality, and now the band have fully embraced the rawness of classic black metal with shades of black'n'roll and a punkish aggression for their third opus Negotium Crucis, released by Apocalyptic Witchcraft Recordings.

Conceptually the band continue exploring the darkness of medieval Europe, now focusing on the downfall of the Knights Templar, which is a perfect complement for the band’s sound. Having a deliberate raw production, the band display the straightforward style of black metal heard in their debut but with much more hateful tendencies. The guitar riffs and the vocals evoke a cold and restless feel, it’s a far cry from the somberness of their sophomore output but no less sinister, in fact, that sinister aura is reinforced through sheer speed and pure aggression. What’s more interesting is how the band didn’t discard their more technical leanings or their forlorn melodies, instead of melody driven atmosphere, the band applies those skills not just in their riffs and skills but in how they composed their songs. Each song on Negotium Crucis is a unique experience, and the band’s punk and black'n'roll direction mixes things up in an interesting direction while successfully flowing like an album, as each song is like a chapter of this tale of human darkness and cruelty. Tracks like the album opener 'Destruction of Shum' display intense speed which crescendos into a folky choirs to close the song, and the same can be said for tracks like 'Devoid of Fear' and 'Rex Mundi' where the band still flex a dark melodicism but with more wrath and anguish.

However, the band did come across a shortcoming. Execution wise, the band succeeds, but its noticeable that they are wearing their influences on their sleeves and in a more overt way, the album’s style and music is very much a throwback to classic Norwegian black metal, particularly Darkthrone in their heyday. While the signature vocals of frontman Dean Lettice and aforementioned black'n'roll and punk stylings give this album a unique edge, the Darkthrone influence is very noteworthy. Even the stylistic add-ons are reminiscent of Fenriz’ and Nocturno Culto’s later work, albeit The Infernal Sea still proudly embrace black metal.

With that said, what these plague doctors from the fenlands accomplished with this album is still worth praising, as they succeeded in distilling the sound of their previous work to its barest essential in order to give themselves new life, honoring their past sound while carving a new path. The British black metal scene’s greatest strengths lie in bands like The Infernal Sea, proudly showing reverence to the pioneers of the subgenre while pushing black metal’s boundaries.