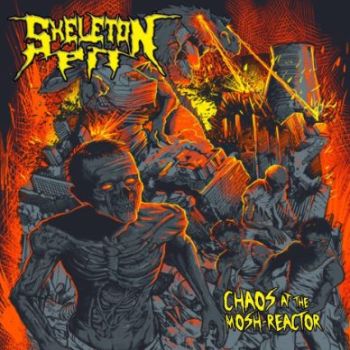 I don't want to sound like an advertising agency, but sometimes I want to scream: "Here comes the New Wave of German Thrash Metal!". Rationally observed, this is definitely an exaggeration. Due to the rather sad evolution of the music business, it is almost impossible that new bands will ever reach the status of legends like Sodom, Kreator and all the other guys of the pioneering days of the sub genre. Nevertheless, young formations like Traitor or Pripjat keep the flag of thrash metal flying. Skeleton Pit, formerly unknown as Pissdolls, do not stand in the shadow of the aforementioned groups. Instead, they are fighting for their place at the head of the movement.

The three-piece scores with a debut that is equipped with a perfect sound. It seems as if "Reign in Blood" is still a very good point of reference for new thrash productions. In view of this orientation, the slaying guitar sound and the clearly defined drums are almost a matter of course. Therefore, I appreciate in particular the fact that the belligerent bass guitar is not sidelined by the guitar. The pumping sound of the four strings marks a very strong detail and is co-responsible for the relentlessness of the mix. Of course, the lead vocals also play an important role for the overall appearance. The guy who is at war with his own vocal chords sounds slightly like Tankard's Gerre, because he has a similar accentuation. Every now and then, the approach of Skeleton Pit lies in close proximity to that of the harshest songs of the beerdrinkers from Frankfurt am Main. Tankard's "The Horde" seems to be a favourite tune of the guys of Skeleton Pit. Finally, song titles like 'Drink Fast or Die' underline their penchant for the Godfathers of alcoholic metal. But the first outputs of Holy Moses have also left their traces. The fastest parts of 'Target for Tonight' with their flying bass and guitar lines remind me of some punk-affine songs of the early albums of Sabina and her permanently changing henchmen (motto: cheaper by the dozen). Did I use the term "punk"? The all clear can be given. No need to panic, Chaos at the Mosh-Reactor provides thrash metal which was brewed strictly in accordance with the German purity law.

The entire debut work offers riffs that are doused with a remarkable amount of technicality, but this does not mean that Skeleton Pit confront the listener with progressive or overly complex structures. It takes three or four runs to be familiar with the songs. Nevertheless, some single sections reveal their strengths immediately. The catchy chorus of the closer 'Tits to Die For' should not go unmentioned in this context, not only because of its stimulating lyrical content. But fine lyrics are good, fine music is better and of more importance. Skeleton Pit know their order and they are familiar with the priorities as well. My concerns after the opener, which cannot fully convince with regard to its relatively stupid chorus, do not come true. Already the directly following 'Spreading the Virus' makes clear that the guys are able to create fascinating gold nuggets of thrash. In a matter of seconds, the opening riff pulls the listener into a song which rattles through at breakneck pace. Slightly malignant riffs and a penchant for high speed rhythms shape the next tunes, only 'Milling Drilling Killing' suffers from the same disease as the opener; its dreary chorus does not work. But in general, Skeleton Pit prove their song-writing skills in a sustainable manner.

The clever band does not make the mistake of emphasizing its "funny" side too much. Admittedly, strange creatures like zombies and mutants seem to play a great role in the lives of the three boys. However, the album is not based on an ironic attitude and features like ferocity, unbridled power and pinpoint precision are not swept under the carpet. Skeleton Pit leave no doubt; they do not only flirt with the stylistic devices of thrash, but they live in a stable relationship with the genre. Therefore, one thing is certain. I don't know whether a "NWOGTM" is just around the corner. But if this wave is rising in the coming months, Skeleton Pit will be part of it.