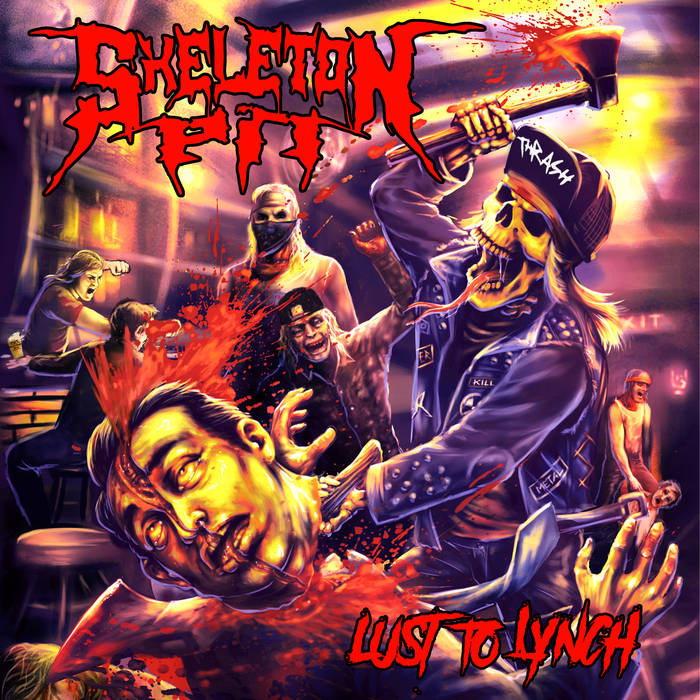 Hit the shit out of the pit, here comes the skeleton again. Germany’s thrashing trio Skeleton Pit is back after a promising debut. The bar is set high. Belgian chocolates, Swiss clockworks and Teutonic thrash raise expectations which are not easy to meet. However, the stage-setting intro with its gloomy touch makes clear that the explosion is not long in coming. Rasping guitars and an appropriately pissed off lead shouter are incited by a powerful rhythm section. All components have found their rightful place in the angry sounding, maybe slightly too modern production. Nevertheless, the technical implementation leaves no important wishes unfulfilled, but what about the song material?

The band does not constantly strive for high velocity and this approach gives them a somewhat US American note. Pro-Pain came to my mind during the mid-tempo parts, although the marginally insane pitch of Patrick cannot be confused with that of Gary Meskill. But both philanthropic guys master the art of hate speeches in an impressive way. (Some anonymous internet trolls will turn their head in shame.) Every now and then, pinpoint background shouts support the lead vocals – they only go wrong in 'Thrashorcism' – the “ohoho” sounds rather amateurish.

Patrick is also responsible for the riffs and in their best moments they get my speakers to glow. 'Like Vultures', for instance, channels the energy of the band very convincingly and Gary Holt can be proud of his influence on this kind of riffing. Skeleton Pit worships the old school and it’s not only the beginning of 'Awaken the Claw' that catapults the listener back in time. That’s a nice trip, because Skeleton Pit pummel the listener with a destructive energy that does not need to fear the comparison with Sodom’s “M-16” album. However, Sodom were a bit more clever in arranging the song list, because Skeleton Pit swing their axes after the intro over the distance of eight neckbreakers without any break. The listener has to wait until the first tones of the closer for a shortly occurring different mood. I don’t say that the album suffers from uniformity, but I guess it would have won with another track order or one or two additional gloomy moments. Yes, perhaps it may seem as if I am seeking the fly in the ointment, but I just want to give my five cents in order to help the band to exploit its full potential on the third album (even so I am sure that the dudes do not need any advice from my side…).

But be assured that the only real weak point of the album is its artwork, another multi-coloured visual insult of the thrash movement. When did the scene lose the really vicious vibes of covers like “Bonded by Blood” or the individuality of artworks like Nasty Savage’s “Indulgence”? I cannot answer this question right now, but I know that highlights of Lust to Lynch - 'Plague of Violence', 'Skull Splitting Attack' (what was first, this title or the artwork?), 'Like Vultures' and many more slice with precise vehemence. No doubt, the skeleton knows how to hit the shit out of the pit – and out of your brain, at least for some pleasant hours.