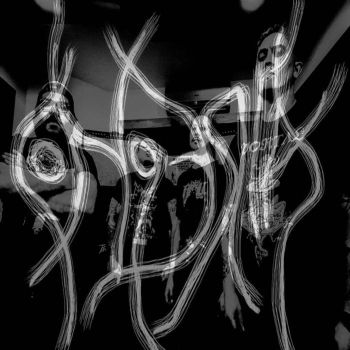 Congeria is one of those extremely weird modern acts. Instead of cataloging it into any traditional metal subgenre I would say it’s atmospheric extreme metal. Act 3 -as this demo is named- consists of just one 7-minute song. The track begins with the rehearsal room feedback, there was already noise before they started recording the take… the approach to the band’s ideas and concept is inherently raw as you can assume. The guitar layer of the track is basically just one disharmonic chord fastly stroked up and down throughout the whole piece.

The drums are the instrument that shows more musicality out of this noise, defining the bars and adding some variation beyond the vocals. The bass and the guitars generate harmonic tension (there is no “riff”) and the “melody” is interpreted by the vocals, so technically this is music even though it's mainly organic noise. The emotiveness of the vocal performance is completely solemn, deranged and demented and is clearly the principal attention focus. The crudeness of the music is also reflected in the lyrics, that really give you the impression you're listening to the thoughts of a madman that simply hates being himself. The vocals aren’t death metal growls nor black metal shrieks… sometimes they are just desperate spoken words but there are some chilling desperate screams and lamentations thrown here and there too, that will give you the creeps.

I am not familiarized with the full lengths previously released by this band but this single is certainly intriguing, it reminded me of PSY-WAR, an enigmatic Costa Rican band from the early 90s that released a demo with Sony Music Costa Rica in 1992 and had a similar ambient/grind musical proposal and lyrical point of view. Beyond any label, both bands' music is visceral, impressionist and demented as fuck. I’m sure the band members must know that material as well as this feels like some sort of tribute. Interesting material, worth checking at least.