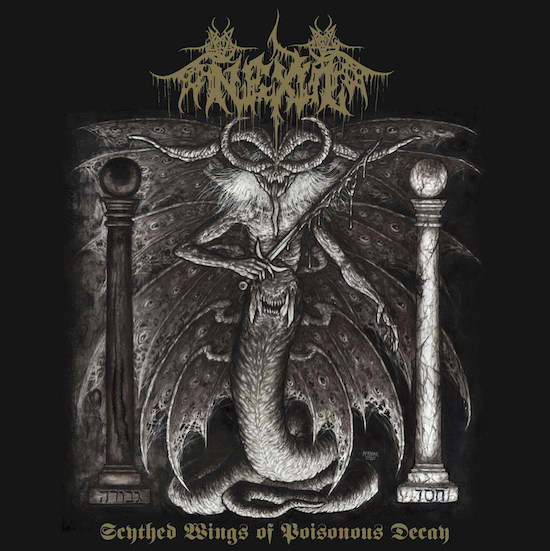 Nexul emerged from the darkest, dreariest and most dissonant regions of the underworld. Fully equipped with a conduct of its own, the beast set forth to apply its hand in the rhythmic movements and incantations of this thing we call black/death metal. 2013 spawned the first recording Nexulzifer, a demo that I still can't seem to find a copy of, this was merely a squirting of the venom awaiting the following release that arrived with the most dreaded ornaments of the ancients pronounced its dusking via the screeching claws of Paradigm of Chaos; a record that would go on to be one of my personal favorites within this modern genre of black/death metal. To this day, I can spin that gem and still feel like it's the first time hearing those outer-dimensional barks and howls. "LEVIATHAN, open your maw and lose your tail and let us blight this shell, we who shall open the Abyss!", still can't forget the beauty of that line. However, it's been some time since the void had been open, 2017's full length was near impeccable, yet it left many (myself included) wanting to hear more of what the Cthulhuean deity had been planning to broadcast.

Summoned to act upon the powers that rippled through the underground with Paradigm of Chaos in 2017, the EP is put into effect, furthering the studies of Nexul be this marked and scorned one, Scythed Wings of Poisonous Decay. A 9 track 36 minute long adventure through the guts of perdition. The pact with darkness strengthened and intensified, the serpent awoke again to provide both wonders and horrors, whether it be to those who foolishly deny or devoutly worship in its temple. What came under the sigil of infinity has returned on this latest venture by Nexul. And who would be handling this?, the feared and revered Iron Bonehead.

Chaos, uncertainty, omens and darkness taint and place a sore and sour upon the broken and damaged, the mortal shell left to experience the detrimental blow of extinguishing strings, pulverizing thuds of the kit and a monolith like, swollen and sonorous vocal delivery. 'Thy Terror' provides the background setting for the condemnation that awaits, and from there onward, the beast hisseth and slithers-forth with the tongues of temptation and execration. 'Reflecting in Glaring Eyes' emits a far more vicious vocal and instrumental interpretation of the philosophy of these Texans. Wondrous I tell you, that this same band would be able to top their past crimes with a bellowing howl. Still managing with needle eye precision to steer clamor to a place where it can make sense. Threading onward to 'Partitioned by Severity' to 'He that Takes the Soul', you quickly understand that Nexul don't just make this music because they like, those hands that caress the whore and partake in the sermons of Hellvetron and Nyogthaeblisz have a mission to fulfill. Impossible to mask something this hideous with 'Partioned by Severity' or 'T.M.I.P.L' exhibiting the band's ugliness with such pride, yet there is beauty that beholds the blind.

Chaos is the spice of life, and Nexul gets that, thus it seems the sect of desecration put their blades to work in reworking and carving out modified versions of their demo Nexulzifer that was put out in 2013. So now in a sense you do get to have their debut on vinyl even though it's not the original recordings. But fear not, no damage was done to the corruption exalted, all three tracks foot a disciplined path, just with a bit more definition with regards to the impact of their steps.

Where to next? Follow the scaly serpent scented rank.