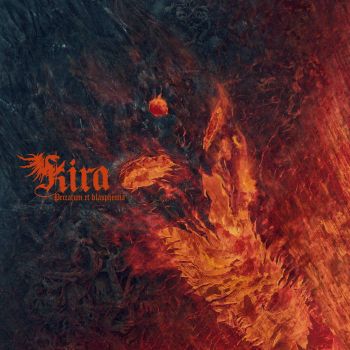 Thanks to the gentleman with the mysterious nickname Nameless (git.) there was all this commotion, which was called KIRA. When the death metal body called Nomad in which he was involved became too tight, and the left hand path tempted with the dark side of the force, in the year 2015 Kira started its existence. After completing the line-up and two years of perfecting musical ideas from hell, the 14-track Ancient Lies was created. But we're not here for that, not yet, not now! Three summers and winters later, when Kira's line-up grew to a quintet and new ideas matured, a second album was born and it was named Peccatum Et Blasphemia.

Yes, this 10-piece work is the subject of my verbal distortions. Thanks to Ossuary Records, this album took on physical form and got itself into my hands. Before the act of consumption however, it is worth mentioning the characters who poured drops of their sweat on this occasion. Well-known for his participation in Behemoth and Nomad's father - Seth composed and played guitar in ‘The Fearful One’. Damian Gwardzik from Northern Plague went crazy on drums in 2 songs. And the graphic side was taken care of by Michał "Xaay" Loranc himself and it must be admitted that his ‘flaming’ vision harmonizes with the hellish nature of the album.

On their second album Kira served us a quite varied dish, where the main note is hoarse black metal with elements of death, but there are also doom-like tendencies. For example, ‘One Gram Of Your Soul’ brings back memories of early Tiamat from "The Astral Sleep" era. Although the album should be described as quite fast and aggressive, we will also experience some solid slowdowns in the ‘Temple Of Suffering’ melody, in 2/3 of ‘Lord Of Hallucinations’ and the character of ‘The Fearful One’ and ‘Weakness Isn't Breathless’. Each piece is enhanced with a glowing blast beat part however and everything would be OK, if not for... Somehow I don't like the sound of the album. The drums are fuzzy, and the guitars lack power in the fast attacks. Only the bass, as soon as music slows down, breaks through and crushes. But these are just my observations. The authors probably wanted the blackness and sulphur to breathe from the record and achieved it. The album is good to listen to nevertheless. It is aggressive, biting, but it also has an atmosphere that makes you feel fear and evil, blood and sweat, and the stench of hellish depths.

Peccatum Et Blasphemia is certainly not a complete album. It will not raise Kira to the thrones of hell, but it is certainly an album that can raise some interest in the band. After all, as the title of the first track says, this is just the opening of the gates of hell, and see for yourself the power of the flames bursting from the cover of the album.