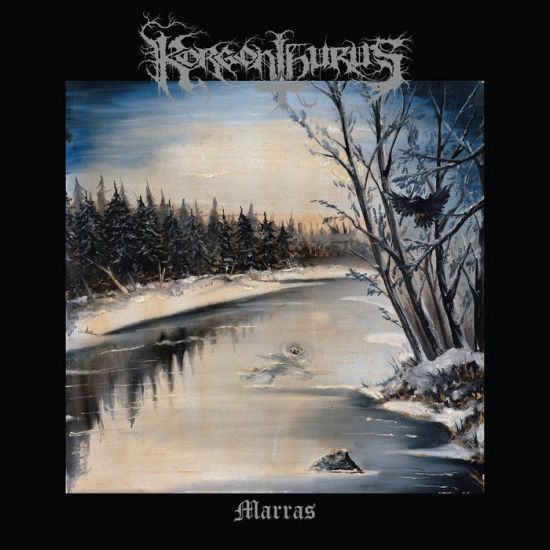 I first became aware of Korgonthurus co-founded by Kryth and Corvus by coming across their sophomore record and was pleasantly surprised enough to check their back catalogue and then be on the lookout for their newest album. Anyway, the band’s debut album Marras was recently reissued and fully remastered by their label Woodcut Records and given how much I’ve enjoyed this band’s work so far I knew I had to check their album now that’s been made more widely available. For the sake of getting the full picture I also heard the original version of the album on YouTube and it was a fascinating experience to say the least.

Marras as a whole was a major achievement in the development of the band. Their first handful of releases where very much Finnish black metal, very raw and very aggressive which as they progressed became more atmospheric and the aggression evolved into somber anguish. This debut album was a culmination of the band’s early development with only two tracks and the runtime that clocks at under forty minutes the band make that time count. Despite the massive length of the tracks and the focus on a relentlessly dreadful and desolate atmosphere the sound of the original version was very raw and very unpolished. What’s interesting is the context in which this album was released, as the mid to late 2000’s in black metal was marked by atmospheric black metal and the now maligned term “DSBM” aka depressive suicidal black metal. I bring this up because Marras even during that time is an anomaly. At first glance the album could be considered “atmospheric” black metal album and even DSBM but that’s just scratching the surface. What’s worth noting is how the band succeeded in retaining the hateful aggression of traditional Finnish black metal, while experimenting with a depressive atmosphere, and at no point does it feel disjointed.

This careful balance of both anger and sorrow is achieved through the guitarwork of both Corvus and Kryth. Unlike standard atmospheric black metal and DSBM, the guitars dominate the sound. For example the first song 'Marraskyyneleet' is carried through variations of two riffs across its 22 minute length. Starting slow with a single distorted and sorrowful guitar melody, then changing to a chaotic mid-tempo riff which is enhanced by Kryth’s drumming, before Corvus takes the lead with his blood chilling shrieks and it organical transitions into pure atmospherics completed with Corvus’ echoing wailing. The second and last song 'Mustan Usvan Kohdussa' follows a similar feel and composition but it’s a bit faster and aggressive, where the atmospherics open and close the track, a fitting way to conclude the album, all in all.

That being said, since the band has remastered the record, there’s an interesting contrast between the original release and this reissue. As I mentioned before, the original album had a very raw sound, some would even say that the original mix was nearly unlistenable, which given how overwhelming the music was isn’t completely unreasonable. That brings me to the remastered reissue. It's actually a really good reissue overall and the songs still retain all the good qualities of the performances. Another good aspect is that the remaster isn’t devoid of grime and grit. Henri Sorvali of Moonsorrow fame was able to clean up the rawness without removing the darkness and anguish of the sound, but there’s two major shortcomings on this version. Firstly there’s the sound itself; despite being the same songs the remastering significantly changed the sound and it almost feels like the band re-recorded the album from scratch, which somewhat is the case. Kryth in the remaster’s description stated that the album was fully remixed and remastered from the original recordings, (while also retroactively bashing how the original album came out) and added keyboards to enhance the atmosphere. While the album is now more in line with how he wanted it to be now that he has the resources, the final product is a completely new work.

Overall this is a great album but there’s now two distinct versions of the same record with stark differences. The original version could be considered both an artistic compromise due to lack of resources on the band’s part, but it also sounds more genuine. The remaster on the other hand is a more complete work and the band’s fully realized vision, but it does feel like a remake of sorts, the experience is much different, although for me it’s a different situation since I listened to both versions back to back. In the end it will be a matter of personal preference between rawness and polish.