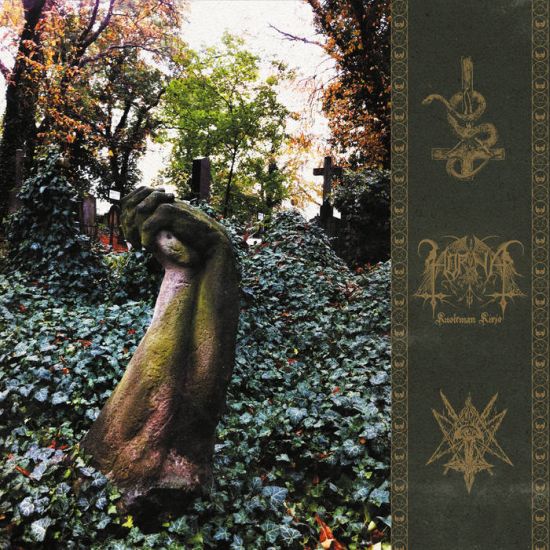 Ten albums is an impressive number. Things are even getting more imposing when it comes a tenth full-length with a playtime of more than 67 minutes. That’s the time Horna needed to reveal to us the full "Spectrum Of Death" as the Finnish title promises. Naturally it is no end in itself to produce such a long album, but Horna are experienced enough to guarantee a good quality, regardless of the opulence of the album’s configuration. So take the challenge and join the black metal marathon.

It becomes clear early on that the latest output from the legend from Suomi has a sound which is not too harsh. Sanojesi Äärelle, for example, was certainly more non-conformist, especially in terms of the sound of the guitars. But that doesn't mean that Kuoleman Kirjo in any way denies the band's origins, style or mindset. The record sounds gloomy, determined and Finnish. Horna are, in common with other long-term activists of the scene such as Azaghal, not willing to leave the field for the myriads of bands to follow without a fight. It is therefore a good thing that the 13 songs represented here are a strong weapon.

There is no intro. Without bordering on musical savagery, Horna start right away with full force and the first climax is not long in coming. The comparatively snappy and catchy guitars in 'Elegia' give the piece a nearly magical, or at least almost unforgettable aura. Whereby Horna certainly cannot be reproached for having placed too little emphasis on atmosphere. They prove that you don't necessarily need keyboards for a creepy scenario (without wanting to start a fundamental discussion about this instrument in black metal). Horna rather pick up the thread that Mayhem once performed to perfection on their immortal classic. I don't have to mention the name here... In 'Kärsimysten Katedraali' they get very close to the title track of Mayhem's debut in terms of aesthetics, melody and vocal pitch, but unfortunately they do not operate on the same perfect level with regard to quality. Nevertheless, this song is another example for their excellent understanding of natural and pure black metal.

Speaking of the vocals, Horna does not focus on a one-note-approach. Unfortunately, the partially pretty sleepy vocal performance in the comparatively lax seventh track does not add value to the record. Anyway, this remains an exception. Horna offers only a few tiring sequences. Of course, one can argue whether 60 minutes of playing time would not have been enough. But you can always argue, even with your children or girlfriend. Whether that makes life better remains to be seen. Maybe it’s the more pleasant choice to stop discussing and just listen to the whipping drums and the rushing guitars of tracks like 'Unohtumaton' or 'Mustat Vuodet'. Obviously, Horna are not interested in experiments and I like this kind of narrow-mindedness.

The final track closes the album in a solid yet unspectacular way. All in all, Horna do not deliver a groundbreaking new approach. It’s not the album with the fastest, most gruesome or most progressive black metal tracks ever. Yet this was surely not the intention of the band. Instead, Kuoleman Kirjo writes another (strong) chapter for the Finnish black metal book. That’s good, that’s enough reason to like it.

The Finnish black metal horde Horna needs no introduction. For over two decades these Finns have been widely revered as the flag bearers and trail blazers of modern Finnish black metal, a status the band proves with their prolific and extensive catalogue of albums and smaller releases. And now the band is returning with their long awaited tenth studio album Kuoleman Kirjo, to be released by World Terror Committee.

Horna, similar to other long running black metal bands, has had a rotating lineup of musicians, with founder, guitarist, lyricist and main composer Shatraug being the only original member. The current lineup of Horna features long time member and second guitarist Infection who shared songwriting duties with Shatraug for this record, Spellgoth on lead vocals, his brother L.H.R. on drums and fairly new member VnoM on bass. A killer lineup all around, since all members are seasoned veterans of the Finnish black metal scene. As Kuolema Kirjo (Translation: The Spectrum of Death) is the band’s newest full length in over 5 years, one could argue the band must've had something special up their sleeves, and indeed the band were seemingly aware of the expectations. Not only is this new record a new direction from their previous opus Hengen Tulet but it is also their first double LP since 2009's monumental Sanojesi Äärelle. That being said this album is not a 2-disc monstrosity as Sanojesi Äärelle was, but it is a meaty 70-minute-long record with a total of 13 tracks, and indeed the band successfully take full advantage of that extended runtime and track list.

In terms of sound, Horna have had significant changes in their music, in their current “era” (which started when Spellgoth joined as vocalist) and the band’s sound can be described as wrathful and somber with some groovy tinges of hard rock and forlorn atmospherics. In this record however (no doubt the influence of Infection's songwriting) the band's music is much more sinister and even ritualistic in places, in some ways the new sound hearkens back to the early days of the band, but at the same time it has the band’s refined and matured songwriting. From beginning to the end the album is relentless and not a single second is wasted, its jaw-dropping how the band was able to have a consistent and substantial record across 13 tracks and 70 minutes and zero fillers. Songs like 'Saatanan Viha', 'Unohtumaton' and 'Ota Minut Vastaan' feature that classic old school blistering speed and sinister atmosphere, while tracks like 'Sydänkuoro', 'Kärsimysten Katedraali' and 'Rakas Kuu' display the more ritualistic and forlorn sound. Each song is consistent with the last without feeling like a drag or rushed. That is the most unique aspect of it, how consistent it all around and how the album flows, which is a testament to how well written the songs are and how good the musical composition is as its so easy for an album that exceeds 50 minutes to be overwrought and drawn out, and yet across my 3 sit throughs with this record I never felt bored or numb to the wall of sound.

Another important aspect that made this album outstanding is, of course the musicianship by each member. For the longest time Horna has been steered primarily by Shatraug, which is understandable since it's his creation, but in regards with this album and the two albums that preceded it, Horna as a unit has become more tight-knit and unified in their performances. Now that Infection had a larger role is become more apparent, Shatraug's vision and conviction remains stronger than ever but it is now shared by his comrades-in-arms, as the band is comprised by seasoned musicians. It’s an understatement to say each are talented. Spellgoth’s vocals are unnervingly intense, L.H.R.'s drumming is hard hitting, fast but also technically proficient, Vnom’s bass work is surprisingly layered and of course Shatraug and Infection are masterclass guitarists and their individual strengths shine together.

Finally, there's the quality of the production. Like with their music, the production on Horna's oeuvre has fluctuated and changed over the years, and this LP is no exception. In fact this is the most polished Horna record to date, which is odd given the band has been celebrated for staying true to the raw and unpolished production of black metal. Even their previous albums with Spellgoth while sounding much cleaner than their albums with Corvus which were still very grimy and fuzz driven. It is worth noting however, given how the music is much more layered and there's more tracks than those previous albums, having a raw and gritty sound would've made the music too much of a strain on the listener, plus the polished sound gave the band ample room to fully display the sinister and ritualistic atmosphere I mentioned before.

Overall Horna continue to be the Finnish black metal luminaries they've long been praised as, and this album both continues their legacy and sees them heading towards a new direction in their Satanic path. But with all that said, it is worth noting that the band don't really reinvent the wheel that much or take significant risks. This is still a quality and ambitious black metal record from a deservedly celebrated band and the band were even able to address and fix the perceived shortcomings of their previous record. When comparing the 3 records of the current era of Horna, this is by far the best one yet and easily on par with their best albums, but as it stands it is another good Horna record, and that's about it. But then again, why would anyone want to fix something that isn't broken? Horna never fails to deliver the unholy gospels of Satan himself.