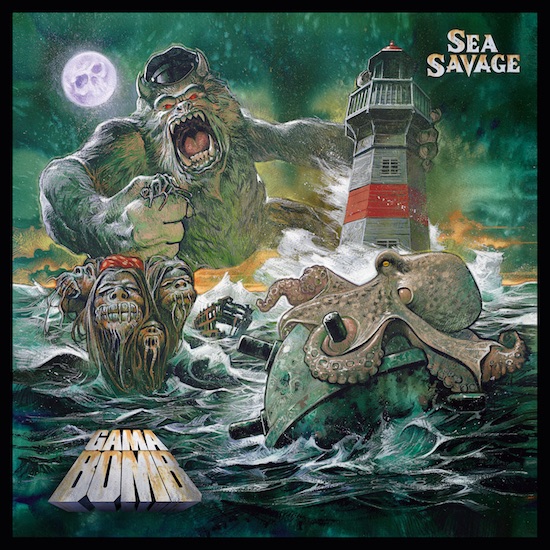 How many bands can use the line "what shall we do with the drunken sailor?" without being immediately banned for all eternity. Maybe Alestorm (but their music doesn't work), Running Wild (but their music also causes instant tiredness) and, yes, Gama Bomb! The kings of hyper-fast, tongue-in-cheek thrash metal are back with a - lo and behold - pelagic album. I admit I had to stumble over Mother Earth for more than 52 years until I heard / read the word "pelagic" for the first time. Miserable fate of a landlubber! Yet now I am familiar with this linguistic jewel, thanks to the promo of Sea Savage. Nevertheless, this promo left me disturbed. I mean, can anybody handle it with information like this: "The pelagic tale follows the crew of the steamer 'S.S. Gama Bomb' as they voyage in search of a real-life Yeti, only to go slowly mad on the high seas. It also features songs about 80s and 90s movies, because Gama Bomb cannot help themselves." Guess I am the one who goes even earlier mad than the crew.

Did I babble about hyper-fast thrash? Well, it seems as if Gama Bomb have been sitting at the beach a little bit too long and the experience of the continuous alternation of ebb and flow has made them more tolerant. Songs like the outstanding 'Iron Blood' still have the pressure, vigour and tempo of their previous material, but there are also pieces that sound comparatively mild-mannered. Or is it just a question of nuances? The "woho-woho" background vocals in the pretty moderate opener do not really fit the sound that Gama Bomb have previously stand for, but they also do not characterize and ruin 'Judo Killer'. Instead, the album holds another dozen tunes that mostly fascinate with the Gama Bombian mix of juvenile nonsense and musical maturity. Of course, the music is of higher importance than any kind of joke, but Philly's not only sporadically appearing high-pitched artistry adds a funny yet wild touch. By the way, the wild component in the music of the band nearly scores with omnipresence - and we may not forget that this is already the seventh full-length of a unit that is in business since nearly two decades. How many other formations have called it a day in such a period or - worse - have become a bunch of lame guitar-holders with sick brains that can't remember how to write an energetic piece of power. Thank God, the unforgettable Beverly Hills Robocop or the Sea Savage, Gama Bomb are different.

The promo wants to make us believe that "Sea Savage is a very different beast from their previous albums", but come on, that's more or less commercially inspired gossip. Firstly, there is nothing beastly in the band's art and secondly,'Monsterizer' and 'Rusty Jaw' are typical, straight and trademark-emphasizing torpedoes that will not disappoint any friend of the formation. Almost the same goes for the hilarious 'She's Not My Mother, Todd' and 'Ready, Steady, Goat' is no kowtow to Impaled Nazarene, but an excellent, riff-driven mid-to up-tempo thrasher that fires brilliant riffs and lines into the amazed horde of freshwater sailors. Maybe it is true that Gama Bomb do not deliver more of the same, but it's still a short way from Speed between the Lines to the here reviewed album and ambivalent tracks like 'Sheer Khan' with its comparatively traditional heavy metal parts remain an exception.

And as if this were not enough, Sea Savage boasts an excellently sharp, properly transparent and absolutely non-sterile production. This means that the album with the great artwork featuring their gamabombinable mascot is at least the fifth full-length in a row which offers nothing else but high class thrash / speed metal. I don't know why the Yeti dwells in the sea, but I also never understood why some crazy dudes say that a monster is living on the ground of Loch Ness. All in all Sea Savage is probably no milestone in Gama Bomb's very strong discography, but it is still a very proper full-length. If the album would be a ship, it could be navigated across the open sea with great elegance; and if I take a look out of my porthole, I do not see many crews who manage their maritime duties in a better way.