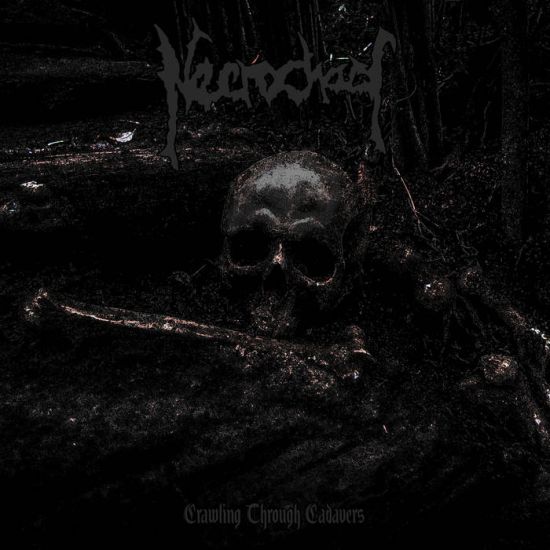 The German one man disaster providing the machinery behind Necrochaos has steered this project somewhere in the spheres of death and black metal with a debut recording titled Crawling Through Cadavers. Originally released digitally and eventually found the support of the magnificence that is Godz ov War Productions, the 3 track demo demolishes with everlasting effect and as such has justified its move to a physical format. Note that the CD version put out through Godz ov War Productions has an additional 2 tracks that were either recorded before or after the original digital release. Either way, they hold up well in comparison with the rest of the album.

Judging by the artwork, I was not expecting death metal this fast, in fact, on the contrary, death/doom is the first thing I thought of when presented with the cover. However, on Crawling Through Cadavers, the vast majority of the instrumentation is attired in a fiery death metal with an added taint of black metal to reinforce the darkness this being has managed to conjure with such devastating efficacy. The indecipherable vocality, the production and just the militant movement of the record is impressive when you factor-in how all this is being handled by one man. Lots of one man metal out there, however not many bring something to the table that is interesting or even worthy of a listen.

The 21 minute maelstrom of malignancy is comprised of 5 tracks, all of which strike like purple-heart timber to the nuts. Mostly on the aggressive side of things (with some doom lurking around) with the kick drum being quite audible and the guitars mixed at a level that allows for clear resonance, yet a slightly distorted tone can be heard crawling-around in the backdrop for a bit of that chaotic feel. There's some amount of technicality to be heard in the drumming, particularly on 'Engulfed in Chaos' that goes well with the guitar solos and leads that mesh with the vocal torrent of project engineer Eugen Kohl (Gnev). Altogether summoning a multifaceted display of dread. I also was made aware that Gnev is involved in a wide range of metal bands none of which have crossed my radar until today, hence the evident experience and influences are broadcasted through his playing on Crawling Through Cadavers.

I hope there's more to follow from Necrochaos, with songs like 'Disgrace is His Law' and 'Caves of Void' embodying a tumultuous yet mystifying aura, Crawling Through Cadavers has somewhat set itself up for major expansion both instrumentally and thematically.