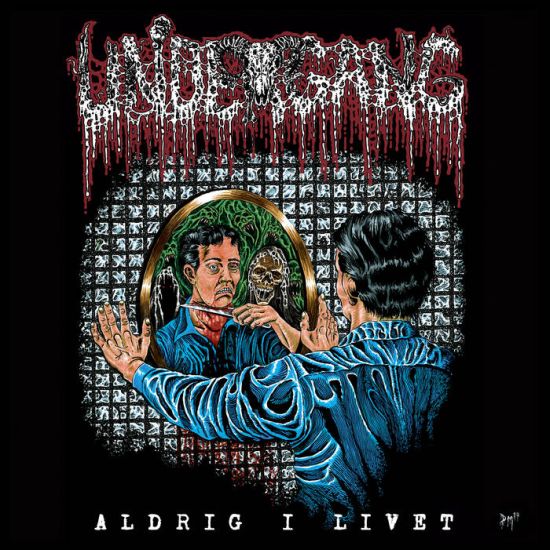 Twelve years later and the sewer lurkers still carry the stench of old death metal along with them. Loved the tunes Undergang put out since the first day I heard them, had to go back and check out what else they had. Listened to their debut album Indhentet Af Døden and fell in love with it. To this day it's still the best I think they've done, but there were opportunities to out do it. Misantropologi is good, though it could have been better if they had balanced the grindcore with the death metal convincingly. The genres seemed a bit disconnected from each other in some instances but no real harm was done. On Aldrig I Livet, it seems as though they did a better job of consolidating the two all the while introducing elements of doom metal. Thus said, I think Aldrig I Livet is Undergang's best material since their debut Indhentet Af Døden, and it definitely tops their previous full length Misantropologi.

The first two tracks are the shortest on the album and they do well with projecting what's to follow on the album. As usual David's vocals are still delivered from some hidden compartment in his stomach reeking of some abhorrent gunk to match with the stomping thump of the drums. As usual Undergang don't stop there, they bring riffs, some are just straight up savage as on 'Indtorrent' or 'Menneskeæder' whilst others take up a more atmospheric approach as can be heard on 'Ufivillig donation AF vitale organer' and album title 'Aldrig i Livet'. Bringing me to the main focus of this new album from the Danish death metal delinquents; though Misantropologi had strong ideas instrumentally, it never really tried to depart from its traditionally lauded roots, hence most of the songs sounded recycled to people who were familiar with Undergang. Therefore, contrary to their prior album, Aldrig I Livet excels at not just merging the death, grind and doom effectively, but the band appears to be more confident about stretching their sound and challenging their musicianship in search of a truly new chapter in their songwriting.

Its evident throughout the album that Undergang diligently focused on giving the listener an unforgettable experience with songs like 'Rodt dodt kod' and 'Indtorret' displaying the band's ability to hold onto their blueprint yet simultaneously create something that takes the extra step in progressing the material, in-turn giving the record a true thematic appeal through the many variations installed. Grindcore moments divert into thrashing death metal segments that take advantage of the momentum by traversing slower territory, and it's back and forth onwards. Yes there is still a lot of DNA shared with Wormridden and Hyperdontia among others; however, that's to be expected given David provides vocals for the latter and guitars for the former; however, the manner in which Aldrig I Livet's musicianship is pitched, one can't help but praise the album for its refreshing character. Hence, I think with this new record, Undergang may have managed to carve out a route for exploration, thus transporting their sound to more exciting all the while disgusting and disastrous domains.