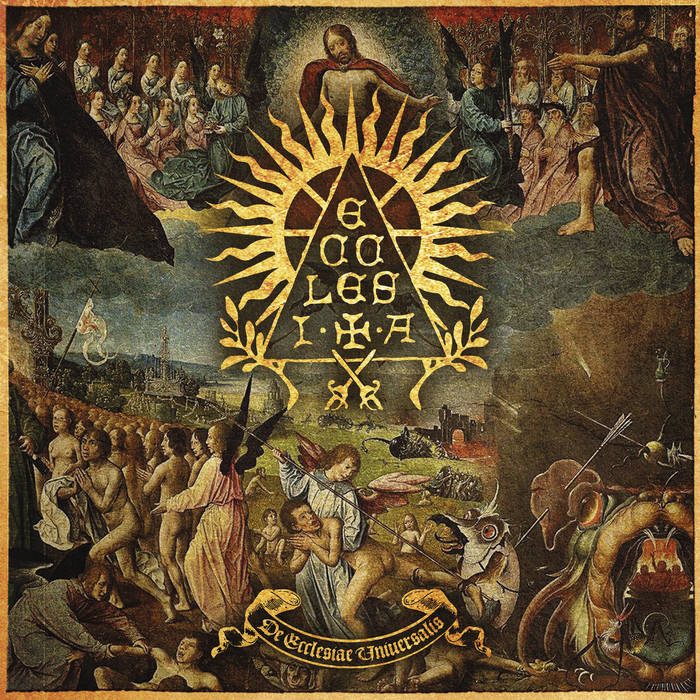 Gimmick bands have been on the rise and while this is not something new, it is slowly becoming an awful trend since most bands spend more time trying to find their quirk instead of composing and refining their sound. Ecclesia (Greek for church) from France, might seem like a typical gimmick band, especially if you take a look at the band members' pseudonyms and their overall clinging to the dark ages of the inquisition but shit-oh-shit this album rocks.

I'll start with the fantastic album cover and the huge weird logo covering most of it. Ecclesia are very on point with their personas and the general aesthetic they want to embrace and every little detail works towards that goal, admirably if I may add. Borrowing heavily from the heavy metal pages of Cathedral, Tad Morose and Candlemass ("Chapter VI" era) they have created a great mixture of doom metal flourished with heavy and power metal elements. The very smart use of the church organ as a primary protagonist, gives an eerie gothic atmosphere to the whole album that sets the grim tone to this epic tale of repentance. Their very talented vocalist Frater Arnhwald sounds great and fits perfectly to what the band is trying to convey, with a multifaced performance ranging from power metal-lish falsettos to flat out death metal growls, always with absolute control and a strong sense of placement.

The guitars are ripping and the songwriting is varied, galloping riffs give their place to slower passages and leads are melodic and haunting. The overall sound is very modern, avoiding the pitfall of an overproduced digital mix, as the band sounds very tight but not robotically precise or devoid of emotion. That haunted backdrop is ever-present and the whole album sounds very coherent both lyrically and musically. I also really enjoyed the small touch of renaming the Venom classic "Don't Burn The Witch" to 'Burn the Witch' just so it fits their narrative. The only thing that prevents me from giving the album an even higher score is that I feel that the first half is slightly, yet distinguishably stronger than the second half and that seems weird for an album that lasts 43 minutes. But this doesn't mean that the second half is bad, far from it, songs like 'Deus Vult' could be highlighted in some other tracklists.

Ecclesia offers a not-so-new, but very welcome approach to the doom metal formula, one that might appeal more to the average power metal fan. I spent the whole year juggling my favourite doom metal album between Sorcerer and Stygian Oath, but the French inquisitors (what a paradox) came in at the last minute, all torches blazing and now I have to re-do my lists. Overall a very enjoyable album and a very promising start to what I hope won't shift to the gimmicky side of the spectrum.