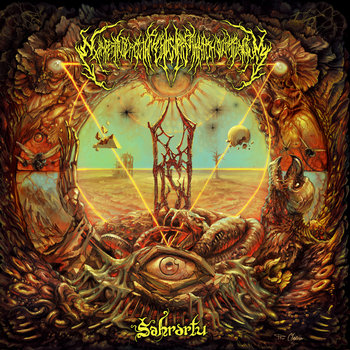 Eximperitus received a lot of hype leading up to the release of their second album, Sahrartu, released in 2021. I personally was quite excited for this album, due to reading up on their "Similar Artists" section on MA, as well as the absolutely sick cover art. Alas… after a few listens, I can't say I'm too impressed by what's going on on this record.

Eximperitus often gets labelled as "technical" and "brutal," but I don't hear elements of either one in their sound. Sure, they're proficient in playing their instruments, but nothing here is flashy in the slightest. The riffs are droning, melodic for sure, but ultimately boring and drag on for far too long with very little variation or switch ups. And brutal it is most certainly not… none of the energy associated with brutal death metal is to be found here. I'm actually more reminded of death/doom than anything else, which I absolutely LOVE death/doom, but this does not do it for me.

I do hear elements of Nile in their sound, but once again, they ultimately lack the energy and creativity that makes Nile so worthwhile. Eximperitus just kind of lingers around, not really doing much of anything with their songs, except doing everything in their power to make you focus on anything else besides the actual music. I feel like none of the songs build up to anything or actually go anywhere, they just come on, monotonously drone with semi-melodic death metal riffs, and then poof, the song is over.

I was quite disappointed by this album… I'm going to continue to listen to it every now and then because it does intrigue me, and I will definitely change my review if it grows on me overtime. As for now… I think there's plenty, plenty of better death metal bands out there that show more character and charisma than these guys. Sorry lads, maybe next time.