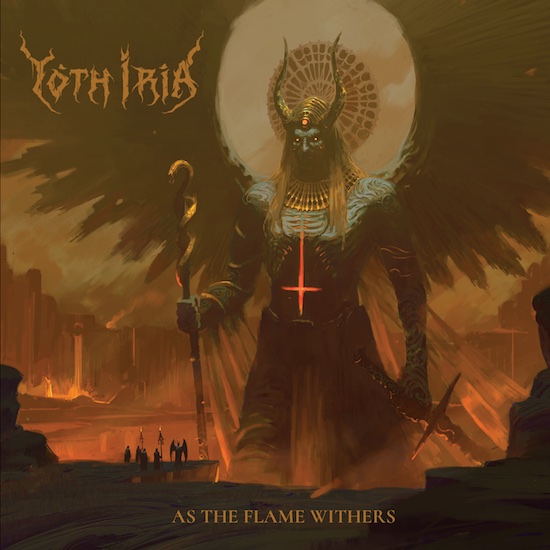 Yoth Iria is the name of a new baby of two Greek veterans. Both played their part in Rotting Christ and roughly a million further bands I don’t want to mention here. The reason for this is simple. I am not familiar with the entire discography of Rotting Christ, but as far as I know, they mostly played a pretty mild form of black metal, maybe rather dark metal. This is also the style description that fits Yoth Iria. Don’t expect icy guitar leads, vehement thunderstorms or fiery eruptions. Yoth Iria perform a very melodic form of metal that relies on dark colours. Sometimes a black atmosphere is completely erased, for example during the very calm part of 'Hermetic Code' with the whispered vocals. But to my surprise, I cannot say that the songs really suffer from their smooth configurations.

Maybe the origin of the band is the crucial reason for my benevolent acceptance of the comparatively soft music. Since the beginning, the Greek scene was more autonomous than, for example, the German one. My compatriots always kept a close eye on the hellish sounds that rushed from Norway (Sweden) over Europe. The freaks from Greece begged to differ and integrated melody, occultism and rituals in their national type of black metal. Seen from this perspective, it is almost nonsense that As the Flame Withers is opened by a comparatively fast and strict number. 'The Great Hunter' marks a good introduction, but it’s rather the remaining song material that develops the full individuality of the new formation. Already the directly following band anthem with its slightly folkloric melodies scores with a profound depth and an unusual form of sombre sounds. By the way, keyboards are not forbidden in the cosmos of the duo.

Yoth Iria try to find a balance between harsh eruptions and more breathing sections. They manage both challenges cleverly while staying away from really extreme grounds. 'The Red Crown Turns Black' holds some fast-paced parts with unleashed drumming, but even here one finds mass compatible sections. Additionally, the guitar tone should be a little more aggressive for the more attacking songs of the album, but I’m sure one gets used to it. Speaking of the production, the vocals and the instruments meet on an equal footing. Apart from small details (I miss a more menacing undertone), there is nothing to complain about. The state of the art mix sounds clear, but not soulless.

Is this a record that excites me from front to back and that I will buy on the first Record Store Day after all the Corona shit in all available formats? No, but Yoth Iria have produced a piece of metal that can find its fans and they haven't recorded lukewarm songs just to fill up the record. Surely there is more exciting music than the acceptable 'Tyrants', which is poor in highlights, but with the somewhat playful, ensnaring 'The Luciferian' a recommendable record finds its worthy end.