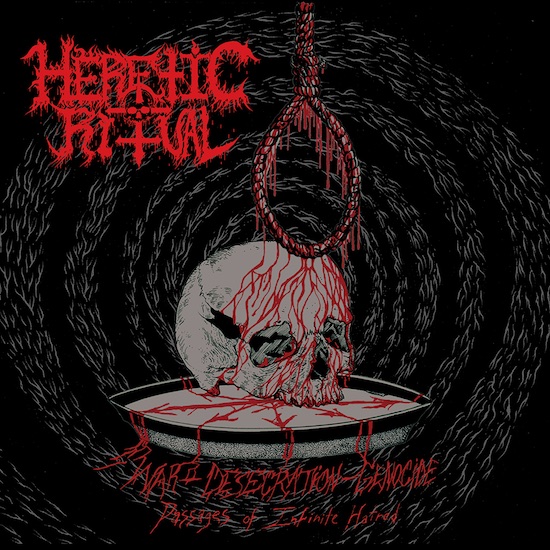 Here's one I don't hear anyone talking about. Coming from Heretic Ritual, their debut full length album War - Desecration - Genocide / Passages of Infinite Hatred sets off a decimating explosion of war/black/death metal that takes the shape of more notable bands within the genre. This unit brings a frighteningly militant display of the subgenre through their steady footed yet heavy and assault laden tracks. To many already affiliated with the genre would sound like nothing new, however there are some interesting paths chosen during the playthrough of War - Desecration - Genocide / Passages of Infinite Hatred that would make anyone familiar with the territory commit to multiple listens. To reiterate again, this is black/death the underground way so there's no major straying from the main path. However, Heretic Ritual makes the experience worth the while for the oldie and those now anointed by the sounds of barbarity with meticulous additions of groove and doom metal marinated in the flesh for a debilitating effect.

A total of 9 tracks keeps the hatred on maximum and the cannons firing through their torrential downpour of cavernous howls, immolating riffs and demolishing hammers on the kit. 'Infinite Hatred' provides the eternal vision of what this Mexican tribulation pack aims to achieve during their time on the battlefield. The well aligned instrumental work brings out a sense of professionalism urging even the most advanced supporter of the genre to pay keen attention to Heretic Ritual. This three-piece sounds amazing and devastatingly heavy which is quite impressive when you factor-in it is army of 3. Their instrumental wielding on fast sections that'd transition to more down paced moments tells of a decorated squad rather than that of a rookie unit. 'Disciples of Fire', 'Macabre Magic Adoration' and my favorite, 'Rat Krusher Kommando', bring out some of the best musicianship the band has to offer the masses. Kicking your brains-in with pummeling strikes from the drum kit, these tracks (among others) standout to me as some of the best highlights on the album in which it seems Heretic Ritual are able to pin-down with efficacy their intentions in the genre. Hence, by trying to take their music from the exponentially cloned to something you'd have some interest in speaks volumes of their attempt to stand apart from the crowd though paying homage to the old and wild.

You'd hear a track like 'Black Perverted Abomination' and begin to feel the musical intensity of the band peak then you'd be in for even more of a surprise when they hit you with something like 'Summoning Genocide' that just storms through your speakers and afflicts you with a carnivorous duality of beastly snarls supported by demonic howling, punishing savagery on the kit and razor-like riffing. Powerful, energetic, continuous but most of all enjoyable.

War - Desecration - Genocide / Passages of Infinite Hatred is an album I hope more become acquainted with before the crack of Heretic Ritual's next calculated genocidal war/black/death ballistic precision strike.