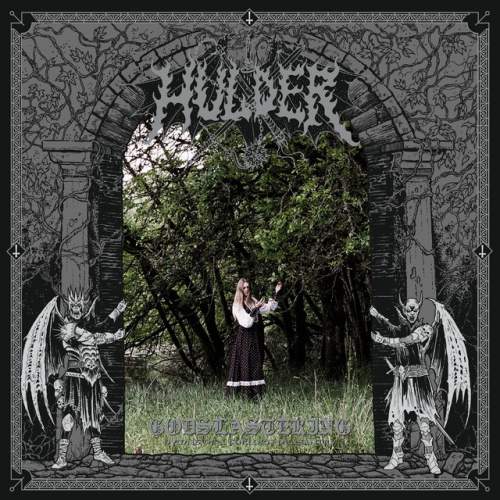 Just by the album art for Hulder's debut recording you could tell there would be a significant impact made on the first impressions of those discovering the project. And such was also the case with Embraced by Darkness Mysts that saw Hulder garner a huge cult following. For me it was that EP which poked at my attention and left me with much hopes that a full length album would follow suit in a short time span. Godslastering: Hymns of A Forlorn Peasantry comes 1 year and some months since the release of Embraced By Darkness Mysts that arrives high off admiration for early 2nd wave black metal and first wave black metal. It's hard to not hear or just ignore the Bathory, Tsjuder, Ancient (Norway) and many other black metal bands of old that Hulder also borrows influences from. That's one of the reasons Godslastering: Hymns of A Forlorn Peasantry is such a great album, there's this grey-area existing within the music in a sense that the music never remains as an exclusive asset to either period in black metal's history. And in addition to that, there's lengthy and interwoven ambient sections utilized on the record that somewhat blur the black metal at specific periods of time to the point in which you forget Godslastering: Hymns of A Forlorn Peasantry is a black metal album. However it must also be noted that this feature also helps to strengthen the atmospheric backbone of the album and gives more meaning to the outstanding artwork. All this and you've got a black metal masterpiece of the current era.

The first two tracks being 'Upon Frigid Winds' and 'Creature of Demonic Majesty' are amazing at setting that old aggressive black metal aura with a flurry of blast beats and slight incisions of Darkthrone esque black'n'roll. Sounds like you're truly listening to black metal at the embryonic moments of its evolution as the keyboards are introduced subtly. With 'Down in Barren Soil' however, the atmospheric/ambient synth really takes control as you approach the middle section given its boastingly confident revelation. And this is only pushed up the ladder with exclusive ambient pieces such as 'De Dijle' and the keyboard intermezzo on 'A Forlorn Peasant's Hymn' that astoundingly support the album altogether providing clean and fluid segue to tracks such as 'Purgations of Bodily Corruptions', 'Lowland Famine' (both of which possess some of the best black metal instrumentation on Godslastering: Hymns of A Forlorn Peasantry) and 'From Whence An Evil Ancient Once Reigned'. 'A Forlorn Peasant's Hymn' in particular reminds me much of some songs on Ancient's "The Cainian Chronicle" which is a good thing because I still enjoy listening to that record every now and again. The ambient pieces are also very soothing and have a sort of moonlit gaze or some kind of mystical hypnoticism about them providing contrast to the intense, flame-lit drumming and riffing. The ambient pieces also project a sort of dungeon synth vibe whether merged with a track such as 'Lowald Famine' or used exclusively on 'De Dejile', but retains enough space such that the black metal can function. You won't feel bombarded with synth, instead you'd find their appearances quite delightful and dreamy in some instances.

Project engineer Marz Riesterer vocals are dynamic and go back and forth amongst a mid ranged death metal gruffy howl, the traditional 2nd wave scream and throaty grunts that keeps Godslastering: Hymns of A Forlorn Peasantry sounding fresh at all times. The production has a hazy sort of cloud over it that adds to the mystical keyboard synth on all tracks but does not get in the way of the black metal. In fact, it supports the guitars in particular whether it be the 1st wave black metal heavy metal licks or the tremolo picking. And as for the artwork, it's beautiful and will make you want to own the vinyl once it is released through the unholy monolith known as Iron Bonehead Records.

Godslastering: Hymns of A Forlorn Peasantry is a bold album for a single individual to create and given it has turned out so highly favorable with many anticipations of its dawning, one can only hope for more to come from Hulder soon.