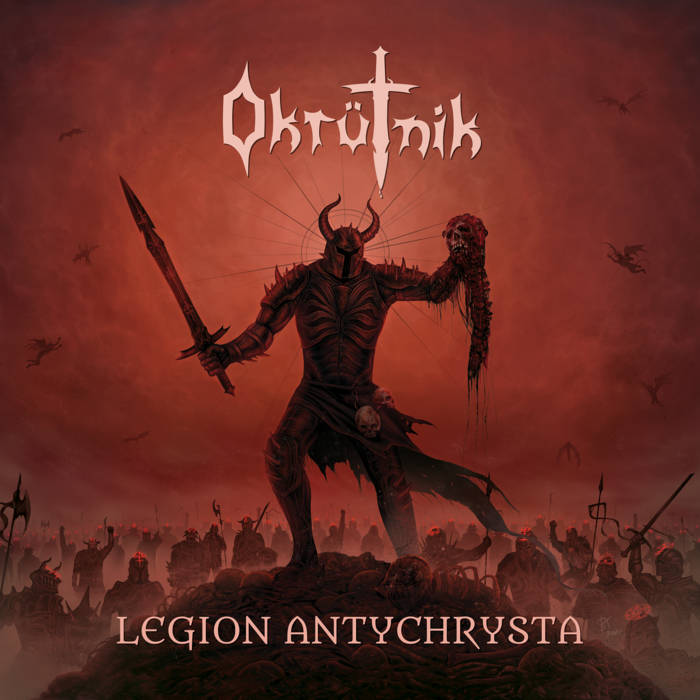 Ossuary Records is a new name on the Polish publishing market and with this album they surprised me completely. While peeling off the foil from Okrütnik's Legion Antychrysta I had no clue what I would be dealing with. A cruel name, cruel cover, four young people and 8 Polish-language titles. The Metal Archives has revealed yet another secret - guys come from the Poland's ketchup region of Kotlin, which could explain the color of the cover. They have been playing their cruel heavy/speed/black metal for two years. The very apparent question marks did not stop in my mind, so I quickly loaded this silvery cruelty into my trusty player, headphones on and here we go...

The first sounds, darkly magical, razor-sharp guitars come in, and another surprise, well, well ... such young players, but so mature compositions. Only the singer's voice revealed the age of the musicians. I have found out how deceptive the imagination can be. Seeing the label heavy/speed/black metal I expected a lighter version of DESTRÖYER 666. Being aware that we are already in the 21st century, I was insistently teleported to the turn of the 80s and 90s of the last century. But how??? After all, when Kat, Open Fire, Destruction, or Venom released their first albums, their parents were their age or younger. Enough of these questions though, let's get back to the music!

Its character and pedigree are from the previous century, the youthful claw present and sounding very modern although it slightly draws with the basement mustiness; it doesn't cross, it harmonizes. While listening to their album once again it reminded me of "Winds Of Creation" by Decapitated. Supposedly distant universes musically, but this youthful wildness and maturity connects both albums. I would like Okrütnik to do so well too so that I could hear their third or even the 666th album, because there is much power in it. I cannot say that Legion Antichrista tore me to pieces like "Winds Of Creation" did, well no, but there is something in this music that many publishing's lack - magnetism. After listening to the album several times, even Michał's limp voice stopped annoying me. Although it is undoubtedly a thing to work on through. The heavy/speed is the music's core, but thrash and black metal influences are also heard. 'Lament Księcia Czarnej Magii' is most strongly marked by devil. Especially its beginning, which could boldly open some black metal concerts. At the other extreme, there is the 'Portret Trumienny', and 'Na Grobach Kwiaty', which is probably a tribute to the ballad-like tendencies of the old good Kat. Here, however, youthful wildness has been replaced by sadness and nostalgia, which I don't buy personally.

Overall, I can confidently recommend this long play to all old heavy/thrash maniacs, because although it does not bring freshness to its genre, it nestles nicely in the head, giving the appearance of a journey through time. If you are the same sentimental bastards as me... I recommend Legion Antychrysta and I will be tracking local pubs to test Okrütnik's power in 'live' setting.