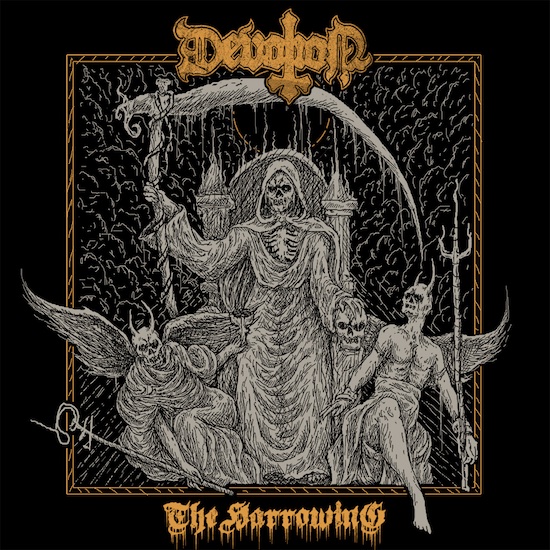 Hailing from Spain, Devotion plays death metal that is influenced by some familiar faces. It won't be long before you pick up on the obvious inspirations but there's sort of a twist going on with their 2nd full length album, The Harrowing. It's death metal as mentioned, but there's also synth, black/death and death/doom added into the equation. You take those properties and blend them with the formula and you have a busy-body type of album, something that just won't go to sleep any time soon or never. The Harrowing is quite a handful and chances are that you're more than likely to not catch everything with one playthrough of the album.

Firstly the record is nearing the 50 minute mark and secondly The Harrowing does not supply the room to catch your breath even in the slower sections of its tunes. There's alot to discover so prepare to hit the repeat button. The primary composition of this album is quite sound. The drumming has significant impact, the riffs are adequate and appear as valid extensions of any particular song and the vocals are delivered effectively. The production is approachable, not too dirty but also not too clean as to deter the interest of the old-schoolaholic. Listening will be a challenge for anyone who can barely keep up for 15 minutes, but there are rewards for your sustained attention and patience.

While 'God Forlorn' would show you one hand with its death/doom synth intrusion following its traditional death metal opening, another hand would appear later down the track list with 'Megiddo's' going all out in the guitar department before reverting to its synthy death doom ambience. Then you continue your descent to songs the likes of 'Valley of Death' or 'Feast of Esdras' where you then realize that the material begins to etch closer and closer to something more reminiscent of an Incantation recording plus the pinch harmonics, eg 'The Mournful Beam', while the synths continue to mimic those you'd usually hear on a Behemoth song of the mid 2000s. So what is being perpetuated by Devotion on The Harrowing is a sort of active shift in sound, with some songs using more death/doom or synth to convey the music.

I would like to advance further into more detail with regard to the compositions of The Harrowing but I'm afraid I would spoil the surprises for you. What I can say in addition to what I've already described is that the vocal temperament of The Harrowing is very controlled with regards to whichever method of death metal is being used. The vocals accurately align with the diverse styles and methods incorporated on the album which speaks highly of the synergy shared among the musicians involved in the crafting of The Harrowing. Will be interesting to see how The Harrowing is received upon its official release onto the masses but for now it's a green light from this angle.