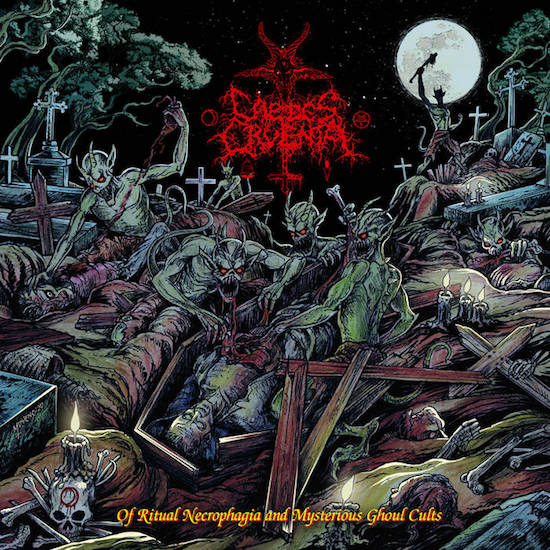 Type: Full-Length
Release Date: February 1st, 2021
Label: Regain Records
Genre: Black
1 Of Ritual Necrophagia And Mysterious Ghoul Cults
2 Aura Of Immortal Souls
3 Into The Ashes Of The Unforgotten Woods (L'Inferno)
4 From The Darkest Paths Of Golgotha
5 The Mystical Ritual Of The Dark Priests
6 Recitation Of Abyssic Necropsalms
7 The Wizard Of Yaddith
8 Under The Shadow Of Death

There's no doubting the fact that once you place members of Kawir, Black Blood Invocation and Hate Manifesto together, you would be getting the highest quality of black/death metal Greece has to offer. Those are just some of the bands the members are involved in and even stretch as far as the mighty and morose Disharmony; hence the final product form Caedes Cruenta is none other than remarkable. Having been aware of their 2014 act of deplore which fell under the name Ερείπια ψυχών, expectations for Of Ritual Necrophagia and Mysterious Ghoul Cults, were cast fairly high. Thus said, their 2021 ritual set to be released through Helter Skelter and Regain Records February 1st, has once more managed to go above and beyond.

Firstly the artwork, amazing!!!, that's a metal cover, then there's the music, what more sonic strength could one's ears bare before crumbling in subservience to synth and guitar compositions this majestic. It begins on the opening title, 'Of Ritual Necrophagia and Mysterious Ghoul Cults' that's an eclectic musical dawning upon the listener. You'll get showered in completion and totally drenched in the most memorable synth pieces. The album appears filthy, yet haunting and eerie, yet beautiful romantic and majestic altogether; not forgetting that in some instances such as on 'Aura of Immortal Souls' or 'Into the Ashes of the Unforgotten Woods (L'Inferno)' there is some sense of melancholia present on Of Ritual Necrophagia and Mysterious Ghoul Cults.

The album displays a lot of dynamism atmospherically, but not at the expense of the actual metal; the vocals are raw particularly in the growling death metal parts where there's sort of a hoarse grunt that sounds just damnable which is contrasted yet supported by sharp harsh sprawling roars. Hence, there is more dynamics taking place on the record, this time within the voices heard. And to top it off the drumming and riffs work so well together pace for pace, step for step, through the changing tides of the music. Whether it be in fast blasting parts or mid paced spacious sections, they make each moment a worthwhile experience. There are even parts on here that remind me of Empire of the Moon and Incantation which makes listening to the record even more of a pleasure. Those pinch harmonics and overlord descending style of keyboards make it hard to shrug off something this grandiose.

'Of Ritual Necrophagia and Mysterious Ghoul Cults', 'From the Darkest Paths of Golgotha' and 'The Wizard of Yaddith' happen to be just a few favorites of the album that even for more than 1 hour seems to be so short for music this good.
The recording sounds like the kind of album you'd play in a cathedral or on some desecrated body of land. By the way, get that Black Blood Invocation full length done!!