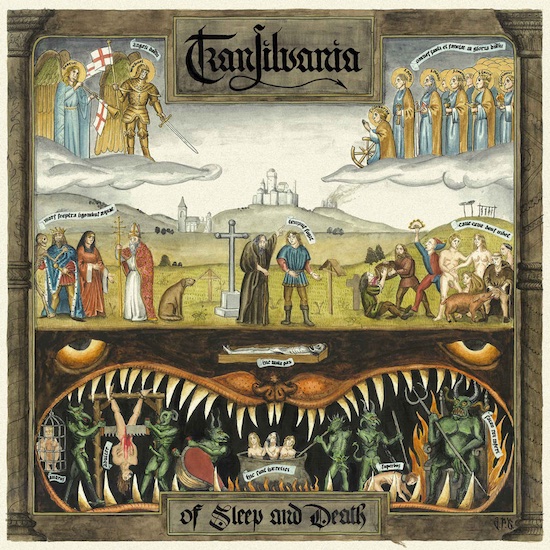 The Austrians Transilvania make us happy just in time for the beginning of the year with their second album Of Sleep and Death. Their first album The Night of the Nights was produced a bit rough still but what we have here has changed quite a bit. But not only in terms of production, but also compositionally, the band, which has now grown from a trio to a quartet, has stepped up a notch. This is true for the cover as well as for the music. The cover features an ecclesiastical image (Heaven, Earth and Hell) inspired by the Middle Ages. I don't know if it's an original or if the band had the cover made but in any case it's a very lovingly designed image that reminds me a bit of Aosoth or Malokarpatan.

But now away with the externals, let's get to the pudel's core. While on the first album mainly old school black metal could be heard, here mainly more melodic pieces in the style of Tribulation have crept in. All mixed with a pinch of old Dissection, Emperor or Nifelheim and some classic metal in the style of Mercyful Fate and the finished product is a pretty varied album, (which at least to me) really opened up after repeated listening.

Sometimes the guitar riffs sound quite dramatic, for example at the beginning of 'Lycantrophic Chant', which develops into a quite catchy black metal piece. 'Underneath Dying Stars' is a track that could have been written by one or another of the bands mentioned in the mid-90s, a real killer that will make the heart of any black metal fan even blacker. 'Vault of Evening' is also a track you should have heard. It is incredibly varied and changes from a jangly black metal piece to a very melodic midtempo stomper that Tribulation couldn't do any better.

I can well imagine that the band will still attract attention in the coming months and it will be completely justified! Give the band and the album a chance, they deserve it! And if you like the album - their first one will be reissued on vinyl as well, according to the label's press info. Too bad for me, who doesn't have his record player anymore.....