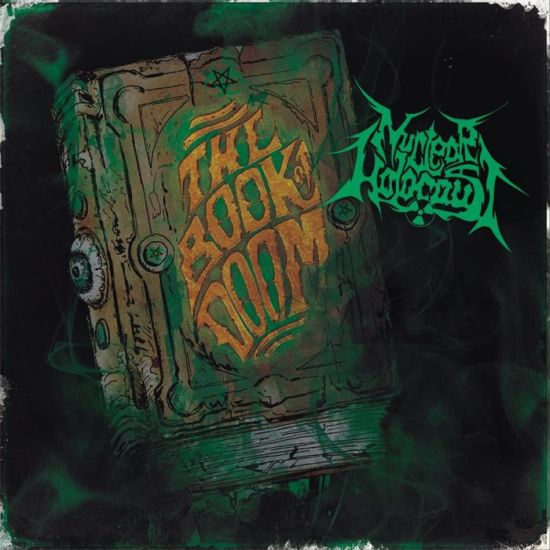 Nuclear Holocaust out of Poland has been kicking around since 2015, and in that short half-decade, the band seems to have forged a decent path in the grindcore / death / hardcore vein, which is fun for an initial listen, but...is there staying power with such a mish-mosh formula?

The current CD in front of me, The Book of Doom, is a compilation of old and new material, so I'll go with the first eight tracks. The new stuff relies heavily on blast-beats and a lot of the pedestrian sing-song vocal patterns (which, personally, immediately turns me off), but as I said, once around the fountain is pretty good for a listen. I did find it hard to decipher one song from the next after a while, but I digress. A lot of the trepidation I had going into this was pretty much encased in these initial tracks with regards to nothing being a standout or memorable experience. I will say the vocals do nothing for me with that vomiting, throaty belching in run-of-the-mill noise presented here. The music, however, fares a bit better with some good riffs and drumming, but the overall sterile feeling I get from these tracks never really left, I'm sorry to say. I just felt no real passion in these tracks, no selling point, and it almost seemed over-produced to the point of draining the tunes of any life.

Now, for the older tracks, which came by way of a 12” split effort with Brazil's Expurgo. While I've not heard the latter's effort from said vinyl, I did engage Nuclear Holocaust's side, and I'll say it resonates much stronger than the newer material. The difference in production is immediately evident, as this has more of a demo feel, but the rawness and organic brutality seemed to flow much nicer and present far heavier than the newer tracks. The 'LSW of Death' track had some nice time changes and a definitive feel of some of the more known early 90's peers. Flowing into the next track (there isn't a track over the 2:11 mark), the precision and volatility was still there; the drumming was on point, and the vocals were really what I personally look for in grindcore – a sort of transitioning tone between throaty and a discernible guttural. I'm really damn impressed with the last eight tracks on this comp. I'd love to hear more in this basic, yet formidable style. Sometimes less is more, and this is the proof positive.

So, the final verdict is a big even-Steven I suppose. I'd say to grab this CD on the strength of the older material alone, seeing as this is the first time these tracks are seeing a CD release. Quite possibly the newer tracks will appeal to some fans of the genre, as long as you don't mind a mix of hardcore and grind sort of vying for supremacy in the tracks. I think those songs could have benefited more from a more solid attention to natural flow, but, alas, every band has its own style and vision, so....

I'll definitely be looking out for the older material via some splits and two full-lengths, and I'm hoping much of the same old-school rhetoric will be prevalent on those efforts.