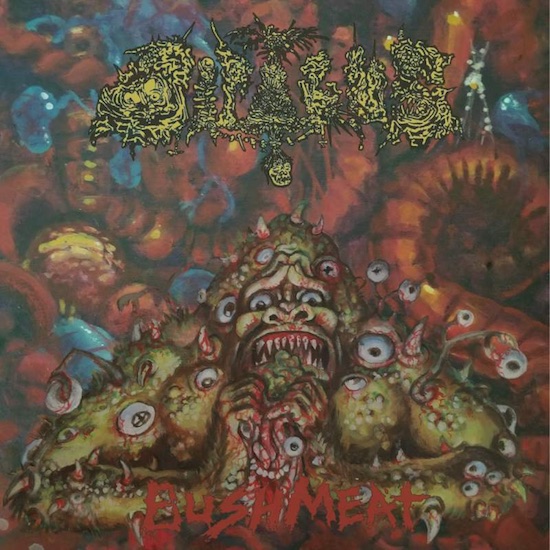 I'll never forget the first time hearing the sample off 'Deloy's Ape', I couldn't deny that it was sad and terrifying all the while, strangely hilarious. That feeling when empathy and sympathy have been invaded by the selfishness of amusement met its peak that day, trying to hold in laughter before bursting into tears with it never felt more difficult. What Dipygus did on Deathooze is both commendable and heartless. They give us a legitimate reason for the band's existence with their dark humor, fantastic death metal and the thematic behind it all. That was in 2019, swing a few branches to here and now in which once again the band are able to not just amuse but top their previous entry with their latest installment Bushmeat.

Animal instincts documented via samples and represented by the dingy and brutal surroundings Dipygus creates with their death metal that's not afraid to take a swing at doom and grindcore on a track such as 'The Khumjung Scalp' for example. "I was surprised it took just about 35 minutes to shrink a head", again the samples they borrow just walk a tightrope between generating either reactions of remorse, disgust, disbelief or in some occasions, hilarity. And the instrumentation used to carve into existence these images has the old school tag pinned deep into its flesh.

The tracks are just fucking terrific, the riffs like the ones heard on the instrumenbtal of sorts 'Plasmoidal Mass (Tomb Mold)', sorry I meant (Slime Mold), totally evoke that feeling of 90s era death metal. Morta Skuld in particular comes to mind a lot especially in the doomier parts of Bushmeat and aforementioned track. The drumming has this thick gluey feel that makes the music more impactful not forgetting the skill behind the kit that can go from either semi technical sections to blinding fast grindcore fury. Riffs are very good here, lots of variation too, from sluggish doom metal stretches, to tight semi technical strings and freight-train chugs as heard on title track 'Bushmeat'. And as for vocals, they sound as though a swamp beast of some sort is awakening from its slumber.

I appreciate what Dipygus are doing with their music; many other bands fail to carry on strong after putting out a remarkable release, but Dipygus here have topped their previous work with something more explorative yet still very familiar and adherent to their previous body of work. A gruesome, funny and very much threatening release to other bands within the underground.

And growth continues for Dipygus; from monkey to gorilla.