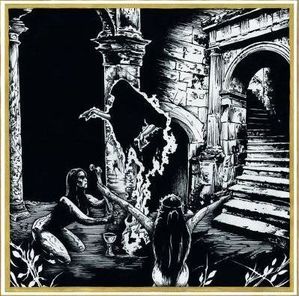 Malum, that’s doublessly true, is possessed by this stinking guy called Lucifer. That’s why their albums and splits are called Night of the Luciferian Light, Luciferian Dimension or Trinity of Luciferian Illumination and so on. Too numerous to mention, as strange as it sounds. But there are also song titles that hail their superstar. 'Luciferian Legion' or, on the here reviewed split, 'Lucifer Forever'. Must be a lucky feeling to be praised so many times, right? Finally, it goes without saying that the split I am talking about is also not complete without this omnipresent name. Welcome to Luciferian Nightfall.

Malum kick off this release with two typical, frosty and mysteriously melodic yet vehement examples of Finnish black metal. I am not quite sure why they integrated a kind of bass solo in the second track, but I guess Lucifer himself asked for it and his loyal servants on earth obeyed. On a more serious note, both tracks make clear that Malum has deeply inhaled the spirit of black metal. All parts blend seamlessly into the next one and signs of weakness are conspicuous by their absence. Track no. 3 begins with a boring piano intro, but before I was able to fall asleep, it mutates into another dark, less swift and slightly overlong hymn which exceeds the 10-minutes-mark. Of course, the dudes from Suomi do not surprise with a firework of innovations during the 26 minutes of their three songs, but that’s secondary in view of the cold guitar lines, the unleashed drums and the guttural vocals. The overall impression is very coherent and therefore 77% are an adequate rating from my point of view.

A second band is pretty useful when someone wants to release a split. Given this fact, I welcome Lathspell. I thought they have crept directly out of a very hidden cave in the endless underground of Finnish black metal, but shame on me, they have already released five full-lengths (and I have not heard just one single tone from them so far. I hate myself for this). Similar to Malum, Lathspell seems to have an affinity for epic tracks as well, but here they need “only” 20 minutes for their unholy trinity. Musically, there are no big differences to the program that their compatriots deliver during the first half of the split. In all honesty, I almost could use the description for Malum’s songs again, because Lathspell takes the listener on another trip through gloomy, ice-cold forests at night. The level of vehemence is comparable, the vocals do not hurt the subgenre guidelines and no song lacks velocity. Moreover, 'The Conjunction of Two Moons' begins with an excellent riff. This track could have been the highlight of the split, but unfortunately the song also holds less compelling parts. Nevertheless, a great, dramatic number, filled to the brim with its inner demons that want to break out. The main line of 'The Hammer of Satan' also sounds triumphant yet malicious – indeed, it would be a good idea to come in contact with more material of Lathspell. 79% for their compositions.

Finally, I don’t want to forget to mention the sound of Luciferian Nightfall. It conveys the wintery feeling that black metal is famous for. Malum scores with a powerful, relatively clear sound where everything is well-balanced. Lathspell presents a slightly more rumbling mix without falling victim to muddy tones. So my advice to you is to check out this split and – nearly more important, haha – my advice to myself is to find a mail order with Lathspell albums.