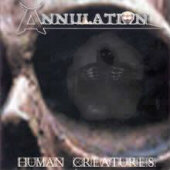 I get a little nervous when I get an album from a band that already have split-up. If I like the album, its sad that they band is gone but if it was bad, I feel guilt saying that the album is crap when the band has already folded and unable to defend themselves. With that pre-point made, on to doing a review of a band that has this little dilemma already.

Switzerland has been a place that has few metal bands, but the lack of numbers are made up because the ones that are there are damned good, and Annulation is one of those metallic exports from the Swiss that are blistering good. Combining Traditional Metal with 80's Thrash, you get these Swiss super-metallers. Sounds like a good thing, huh? You would think that, but no...

While this trio are very well versed musicians, it is what they are playing for material that irks me. No matter what they play, it comes clear that they are fans of the Brazilian band Sepultura and basically end up sounding like a lower than fifth rate version at that. With little in the way of original riffs, or any variations in what there is they seem to be a bad cover band trying to masquerade as being a original act. Each of the nine tracks are a prime example of this metal sadness.

With the fact that Annulation is broken up quite awhile ago, this review shows the reasons. With all the talent they seem to have had, their over sounding of Sepultura and cheap repetitive riffs and melodies was their downfall. I do not know if any of the members are now with any other bands, the fact that this project is gone seems to be a good idea.