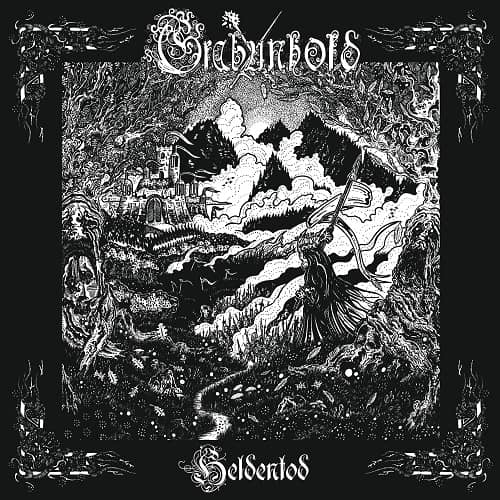 Unter Dem Banner Der Toten was a relatively good introduction to Grabunhold. The EP promised greater things to follow suit from the band thus in the presence of their 1st full length album Heldentod, the initial formula that made their prior effort so effective has once again been utilized only now with more potency. Thus it would be fair to say that Heldentod is well above the standard set on Unter Dem Banner Der Toten.

I had already adored the work done by label-mate Hulder with her debut that falls within the same path as Heldentod musically, however Grabunhold managed to execute their formula more to my liking on this album. When tackling the task of mixing ambient solos with black metal it can often be quite challenging, if not, tedious in some instances but Grabunhold made it all seem like second nature. The ambient installments do not appear to be just thrown-in for no particular reason, instead, they appear to elaborate more and give added definition to the actual black metal tracks. Also there's a frequenting romance occurring between melancholy and mysticism that adds to the dynamic nature of the material. And strangely, there is a sense of ease and tranquility despite the ruthlessness of some tracks. The atmosphere could be unpredictable at times but always falls in line with something the listener will appreciate, hence there is no random absurdity occuring on the record. They are sweet passages of sadness, 2nd wave Scandinavian black metal testosterone, folky/pagan chanting and singing, mid paced tempos that suddenly launch into a pummeling cvlt black attack and the guitar+drum work is phenomenal through and through.

At first listen I was under the impression there was something missing and indeed there was, it just turned out that missing "something" was me not playing it loud enough. It truly is a treat to the senses when you blast Heldentod on 10+ volume settings. All that rich sound thanks to the fantastic mastering and mixing pokes out at you like an anteater's mouth and you can't help but to get swallowed by the immersion displayed on this record. You will find yourself repeating the record to the point of learning and loving the instrumental passages in particular which help to tell a story instead of just play from point a to b.

Heldentod is quite an improvement over the previous entry put out by Grabunhold, which was not a bad album but I don't think anyone predicted the band's next effort to be this much of a testament to bravado. That says alot about the work ethic. No songs mentioned here because it's one of those albums that you need to hear in its entirety to grasp the grandeur eclipsed on Heldentod.

Another strong entry for Grabunhold and the Iron Bonehead dominion that remains highly coveted and envied within the chambers of underground black metal.