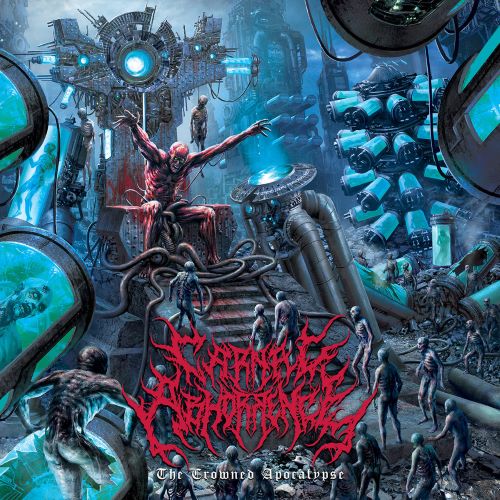 You know what the best part was about Necrophagist? They were fucking catchy. I will have not had a passing thought for them for a year and the riff from ‘Stabwound’ starts playing in my head unprompted. Even on their first album they had a certain special something to their riffs that was immediately memorable, and at the time it was probably controversial because it didn’t really sound like...death metal. The neoclassical influence had its hands in the mix for sure, but there was a slick, calculated cleanliness to the riffing and soloing that proved to be extremely influential in the long run, but at the time was a total 180 - little did we know it would be the blueprint for an entire niche of music nerds to endlessly obsess over.

Even though people can replicate Necrophagist riffs at full speed, it takes a different mind to create a melody with a similar level of complexity that still gets stuck in your head. Now, what if I were to tell you that Carnal Abhorrence managed to pull off such wizardry with the guitars, while also retaining enough brutality to appease everyone who needs chromatic scale riffs and big drops more than they need oxygen? It’s a bold claim to make, but The Crowned Apocalypse did it - not for the entire album, mind you. This has a few different methods of execution, with some of the tracks being more multidirectional and slam-heavy like Serocs or Insidious Decrepancy, but some songs (‘The Unholy Infinity’ and ‘Necrotonic Rebirth’ in particular) are filled with super tasty guitars that immediately drew my attention to this when I casually had it on in the background. I knew I was hearing something weird and different when the fourth track kicked in with a cheesy keyboard that sounded straight out of a Cradle of Filth knockoff band, but the whole time the melodies jumped around in intriguing ways and the song changed its course at the right times. The album then hints at the melody more and more until the final track, which has an absolute monster verse about a minute in that has not left my brain since it entered through my ears. The part that leads into it is no slouch, either, which is part of the reason you’re already paying attention when the earworm busts its way in. I don’t often make comparisons to Necrophagist, because many will cite them as an influence but few of them actually have that same feeling in their melodies, but I gotta tell ya, Carnal Abhorrence has it.

When you get right down to it, Vlad Carnage knows how to riff, and his ear for melody and songwriting allows the music to overcome the cheesier elements of the production. These delicious melodies that I’ve been going on about sound like they’re coming out of a 90s video game, for one. It’s especially intriguing that they work so well in the context of crushing, heavy music, but it provides both a contrast to the dense, chunky guitarwork that surrounds it and a lick to bait you into listening again - for most bands, the guitar tone in the higher register on this album would be a weakness, but Carnal Abhorrence turns it into a selling point. The programmed drums are also written in a way that their hyperfast unrealism can be overlooked. Some research on the good ol’ Metal Archives shows that in the only other full band Vlad Carnage played with, Order of Leviathan, he was a drummer, and The Crowned Apocalypse demonstrates this with its drum programming. Though Vlad can’t play the parts himself, in theory, a super-talented drummer with a lot of stamina (and meth, probably) could.

The more inhuman and uber-technical aspects of the drum programming and performances doesn’t detract from the enjoyment of the album for many of the same reasons the 8-bit guitar tone makes The Crowned Apocalypse extra enjoyable - these are well -written songs that manage to get you moving in a few different ways without overstaying their welcome. This is just over half an hour, which is the perfect length to cover a lot of ground without starting to feel repetitive or tiresome. My one minor quibble is I would have loved to hear them double down on the melodic noodles and ease up on the slams a little bit, but that’s more a personal preference than anything and it’s possible that adding too much wanking and having not enough pummeling to balance it out might cause this album to lose its dynamics. Also, when you’ve been bombarded by a bunch of snaking, chromatic riffs and thick, low gurgles for a few tracks it does make those few drops of sweet licks extra tasty. Put simply, this is an album that shouldn’t work at all with the building blocks it uses, but it does. This should be a garbage Rings of Saturn clone, but it manages to feel novel without having to reinvent its genre. The Crowned Apocalypse should be mandatory for any brutal death metal fan, and has something for the seasoned listener who’s looking for a little extra in the package.