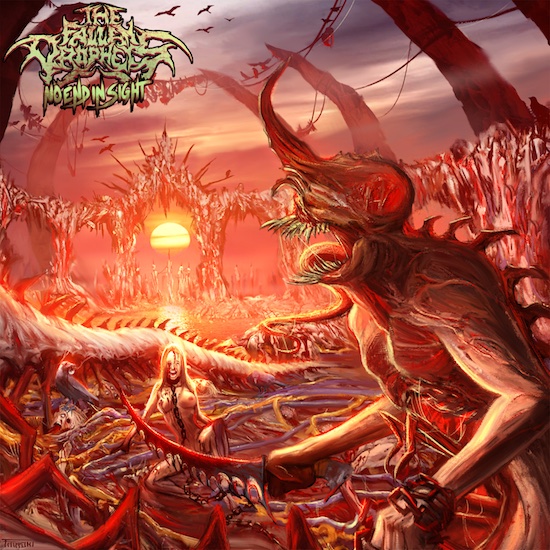 Sounds precisely like what I had envisioned. The cover art was a major giveaway. Sick stuff coming from South Africa from a band going by the name of The Fallen Prophets. I believe "No End In Sight" is the 4th recording since formation in 2011 and it follows their 2nd full-length album which was put out titled "Relentless Killing Motivation". The best description I can contrive for The Fallen Prophets style of metal would be, brutal/melodic deathcore. You may have your own definitions of their technique but currently that's what it sounds like to me. Big question; do I like it? Yes. Given my history of loathing deathcore one look at the cover art and it could have all gone to shit when it comes to me sitting down to listen to this EP but the musicianship saved it.

What makes it likeable? It's the fact that these guys can riff. Deathcore itself has a disgusting habit of encouraging laziness particularly in the guitar department; Fingers don't appear to move on the fret thus making it an easy target for mediocrity. The difference here is the guitarists know how to move their fingers with regards to touching the fretboard. That's not to say there aren't any chugging or breakdowns to be heard; they are indeed, however; the guitar solos are so good you don't even notice the former. The vocals too have a familiar deathcore edge to them but again they don't get in the way at all, in fact they sound organic and not computerized to fuck. And the drumming is downright killer. Lots of blast beats (yes triggered), fantastic fills and tom+snare combos; also think I heard a few gravity blasts.

They're also quite a few big names that helped out during the creation of "No End In Sight"; such as Kriss Xen of Vulvodynia and Ivan Meathook of Blood Red Throne to list a few. Most brutal death/slam fans are going to eat up tracks like 'Killing the Last Savior', 'No End In Sight' and 'Believe'; all of which lay down menacing licks, drumming and vocals. But of them all, I'd have to say 'Deception' is the best track on the record. Its accelerated climax to black metal is just insane and unexpected. It gives the album an amusing twist and closes it off on a high note. I guess my only complaint is that I wish no guest artists were featured and it was all the work of The Fallen Prophets. Nevertheless, still a good album that you should enjoy if you appreciate this kind of metal.