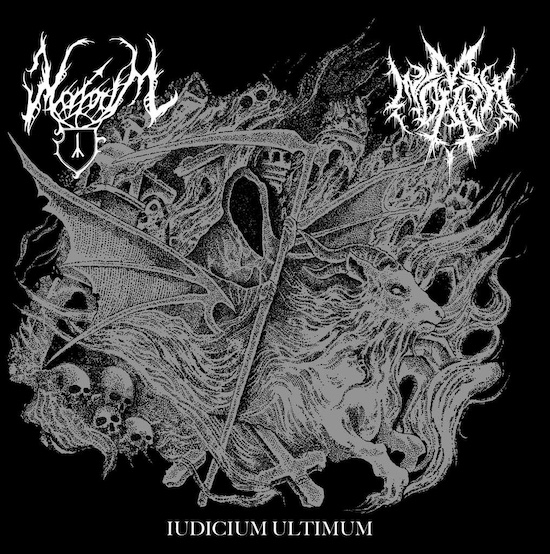 Does it make any sense to deny the obvious? To say "it's not what it looks like?" when you are caught having sex with someone else by your own partner? I think it's better to tell the full truth right away. That's why I'm admitting it right now, at the beginning of this review: the more I know from Mavorim, the more I'm on the way to becoming a fanboy.

The band’s contribution to this split is excellent. I agree that the intro is not very relevant, but the three regular songs impress with their close-to-perfection approach. No, Mavorim do not show the harshest black metal approach and their guitars avoid any hint of iciness. So climate change has at least partially reached black metal. But their compositions inspire with a flawless flow. Apart from the one or other acoustic break, the driving character of the pieces leaves nothing to be desired - and of course the breaks are also quite skilfully set. In addition, few but highly efficient riffs unfold. The one of 'All Meine Seelen' immediately takes the listener on an overwhelming journey after the atmospheric intro. The mighty force of such pieces can only be broken by those who are able to stop a moving train by sheer force of will, but I honestly don't know many people with that ability.

Yes, there are some moody keyboards to find here. They send discreet greetings from someone far away, he calls himself Rob Darken. Nevertheless the guitars and the throaty (and in rare moments clean) voice shape a sound which has not much in common with that of Graveland – just to avoid misunderstandings. Along the way, Mavorim show how to build a song perfectly. From the first notes of the warm, soulful guitar to the highly intense double bass whipped rhythms before the first verse, 'Ein Fluch Ward Uns Geschenkt' ascends in an ingenious way (and its metaphorical lyrics are also great). I don't know in which book with seven seals you can read this, but Mavorim have a phenomenal feeling for melodies and for how much space you have to give them. Their harmonies reflect aggression, melancholy, despair and triumph. And it certainly seems unimaginative when I string together one praise after another, but the coherence of the individual pieces also makes me dream of the black metal paradise. So we get three fantastically designed songs, competently produced (without dirt, but always with an uncomfortable undertone) and masterly executed. From my point of view, 'Ein Fluch Ward Uns Geschenkt' marks the best part of this triumvirate, but 'Tod Und Teufel' and 'All Meine Seelen' also hit the bull’s eye. So it’s 90% for Mavorim who show some lazy guys in the global scene that it is possible to release high quality music every year. (Lord Ahriman, Demonaz, do you sleep well?)

Ad Mortem? Oh, that's right, they're still around. And how! They are closer to the typical style of the subgenre. As soon as the intro ends, their guitars embody brutality, the machine-like drums praise Lucifer and the performance of the lead vocalist indicates that his circle of friends is rather small. The vile melodies are not completely on the Mavorim level, but still (very) good. The same applies for the mix. It is less differentiated, the single instruments are not quite cleanly defined, but I write about black metal and not about the lullaby at the annual overnight party in the kindergarten. Nose closed when picking up your child the next morning!

Ad Mortem love to take a bath in extremely murderous sections. For example, “Schwarzes Blut (Excitium I)” has some mega-intensive parts. No doubt, if you play this song in Eastern Europe in front of one of these numerous, larger-than-life monuments to communist “martyrs”, they crumble to dust in minutes. But I guess this action would bring you directly to the next dungeon – and this leads me directly to the short yet homicidal “Kerker” (= dungeon), another brutal, straight and prisoners-hating eruption. Forgive me, but once again, I do not identify any filler here. Entirely the opposite. While I take the precaution of writing Ad Mortem's first long-playing record, not yet published, on my shopping list, the horde from Saxony skilfully rushes through the back areas of their self-created hell. A little Grabak, a little Vargsang, why not? The calm outro provides enough room to rest. 80% for Ad Mortem, who turn out to be a worthy partner of Mavorim – and this says a lot.

To sum up, this split shows two different styles of black metal and this is a good thing. Mavorim and Ad Mortem are crossing the blades and the listener is the winner. Two very similar bands do not need to join forces in order to release a split that leaves a more homogeneous overall impression than a typical Graveland or Bolt Thrower album. Given this double strike, German black metal patriots can be proud of the Teutonic scene and now I leave. I have to listen to Iudicium Ultimum again, naturally in total darkness to avoid any form of distraction.