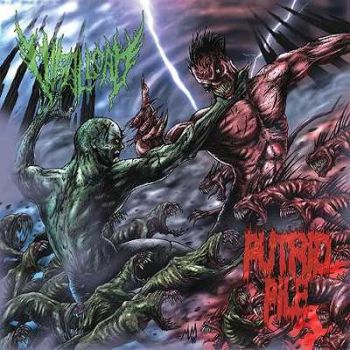 The announcement of this split made every Viral Load and Putrid Pile fan get really excited, wondering how could this battle be and (most important) who of them would be the best. Since I don't consider myself a fan of neither Viral Load nor Putrid Pile, I checked this split to see who of them was victorious.

Reached the conclusion that this is a draw (and that Viral Load is no present in this split).

Viral Load:
Okay, first we have Shawn Whitaker, known for his band Insidious Decrepancy, a band that uses extremely fast programmed double drum kicks, fast guitar riffs and gurgle growl vocals. Now, pick up this band, change his name to your other band (Viral Load in this case) and release a split under that name with another one-man band. I mean, seriously, this is not Viral Load, whatever you hear here is not that band, it's Insidious Decrepancy disguised as Viral Load. But still, it's not that bad. Their songs are good, starting from 'Dog Food Lube' (which has an awesome breakdown in the first seconds of the song and probably the most normal drum machine), passing through the extremely fast 'Methlab Machete Massacre' which has the most furious speed and riffing of the tracks in this split, and ending with the cover of 'Cod Piece Face', (Dead Horse) a good cover in my opinion. But (as most bands have a "but" part), I think it would have been better something more Viral Load in this split. The extremely fast speed of the drum machine, along with the guitar riff and vocals make you think you are listening to Insidious Decrepancy instead of Viral Load. Besides that, there's nothing wrong with this side of the split.

Putrid Pile:
Second, we have Putrid Pile, made by a guy also named Shaun (no joke, in case you haven't heard of this bands yet). Putrid Pile differentate from Viral Load in the composition of the songs. While Viral Load uses extremely fast guitars, machine-gun programmed drums and gurgle like growls, Putrid Pile puts more emphasis in the guitars, making them sound brutal and awesome at the same time, using a “softer” drum machine and using deep guttural growls and high screams (sometimes combined) as vocals. If you think that "speed makes brutality", you are wrong. 'The Satisfying Dead' is the proof that Putrid Pile can be brutal without breaking your guitar strings from the speed you are playing. Next track, 'A Fitting End' is a return to most of the brutality that had in his first album Collection Of Butchery, but at the same time mixing it with some melodious and slow parts. Final track 'Lifeless... Not Useless' resemble his previous tracks in this split. Starts fast, the goes slow, then goes fast again, using a double vocal scream in the beginning of this track.