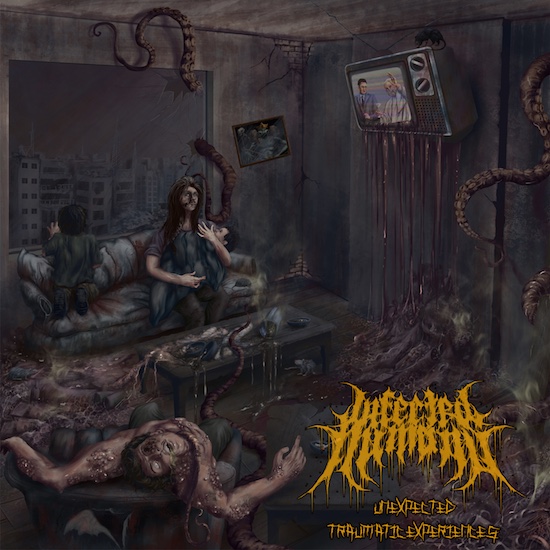 It’s kind of weird to think of Disavowed as an influential band, but I guess they had more of an impact on brutal death metal than I thought? When comparing Infected Humans to an album like "Perceptive Deception" the approach to brutality is identical: 80% hyperspeed kick drums and low snakey riffs and 20% slower grooves to (only slightly) break up the monotony.

It’s not quite at the 90/10 ratio that would put it at Brodequin level, there’s just a modicum too much tact and musicality, but there’s still a pretty shameless ping going on the snare and given the frequency of the speedy drums, it does get a little bit grating and sterile by the fourth or fifth track, even for a blastbeat junkie like myself. The riffs may cut through clear as day while still retaining their thickness and punch, but sometimes it feels like that comes at the expense of a little bassy oomph in the rhythm section.

Unexpected Traumatic Experiences is a listenable record with some competent riffing, but it struggles to write songs that are able to string together momentum. A majority of the time, Infected Humans are content to ride their drummer’s speed into oblivion, with a lot of the riffs just kind of existing as a backdrop to the blasting, never gelling into a cohesive song. It feels fast and stimulating, M. Togra clearly has chops, but this isn’t the kind of music that I would point to as “technical” or “challenging”...with the very notable exception of the final proper track, 'Chaotic Biological Organization'.

As this album goes on, despite the somewhat bland stapling of fast sections together, it does show the occasional hint of variety and nuance, and then track 10 comes in and it’s two steps ahead of everything else on this album. There’s a mathy start-stop thing and tons of little experiments with unusual melodic patterns and chord changes - even the production feels different on this specific track, more balanced to the band’s overall sound. It makes me wonder if there’s more going on here than I’m giving credit for.

That being said, 'Chaotic Biological Organization' is a double-edged sword in terms of how it contributes to the album’s quality. On the one hand, it’s a good song on its own, and does a lot of the things I wish Infected Humans had more of on the earlier tracks...and that’s also the reason why it retroactively made the songs that came before it worse. It reminds me that the exact same band, on the exact same album, is capable of writing better songs. This is a strange conundrum for me to be in, because I don’t think I’ve ever heard this very specific kind of uneven-ness in an album - the closest thing I can think of is when Blood of Christ re-recorded their debut and they included a few bonus tracks that, for some inexplicable reason, had none of the shortcomings their discography is otherwise plagued with.

At the end of a day it’s probably a net gain that they decided to include 'Chaotic Biological Organization', because it shows what Infected Humans are capable of when they really give a shit. It’s still confusing to me they didn’t save it/use it as the reference point for the next step in the band’s evolution, but perhaps it’s a subtle indicator of where the band’s going next. That track aside, though, Unexpected Traumatic Experiences is competent but I can’t really see anyone who doesn’t give Deeds Of Flesh weekly listens getting into it.

Spreading sickness from Ecuador, Infected Humans' debut full-length packs a lot of unexpected surprises that will catch your ears off-guard for sure.

I can say that this little record has a lot of shining moments, even more so in its later half. Once the 'Intro' is delivered, a sonic maelstrom assaults you. Brutal, frenzied riffs are all along this ride, with a wide variety of them. Thrown around in some unexpected moments are some leads, melodies and clean guitar sections, which go away as quickly as they spawned. Vocals are a deep growl, very low and brutal fitting for this particular style. Drums are just around everywhere, barely resting at all. There are a lot of great moments throughout the album, especially on the guitars. Their rhythms can vary from brain-splattering brutal death metal to crawling, creeping doom verses to twin dissonant moments. And while it's all chaos from the start, it is around track 5 that things calm down a bit, give you breathing room and become a more direct, controlled force. All while not losing an ounce of brutality.

However, despite all of the aforementioned, this album has a really major problem that does not go unnoticed. What the hell is that snare sound? Is it even a snare? Sounds more like a tin can being smashed repeatedly with a wooden spoon. I understand that this particular sound is nothing new ("Satan's Revenge on Mankind" being the most infamous example) but it's just so annoying that it detracts you from enjoying all of the music. Not to mention the mixing was made so that the snare sounded a bit louder than the rest of the drum kit. Add to that the ridiculous amount of blast-beats, gravity-blasts and many other drum techniques and, well, you get my point.

Packing 11 tracks and featuring guest vocals from other known bands, Infected Humans has shown a lot of potential. However, as stated previously, the drums in particular can be more distracting than complementing to the overall experience. If, however, you can stand this issue, be sure that you'll be delighted by the guitarwork executed here. My favorite being track 10 (trust me, you want to listen to this and the outro). I hope the drums issue will be rectified in the future, for there is a lot to enjoy here.