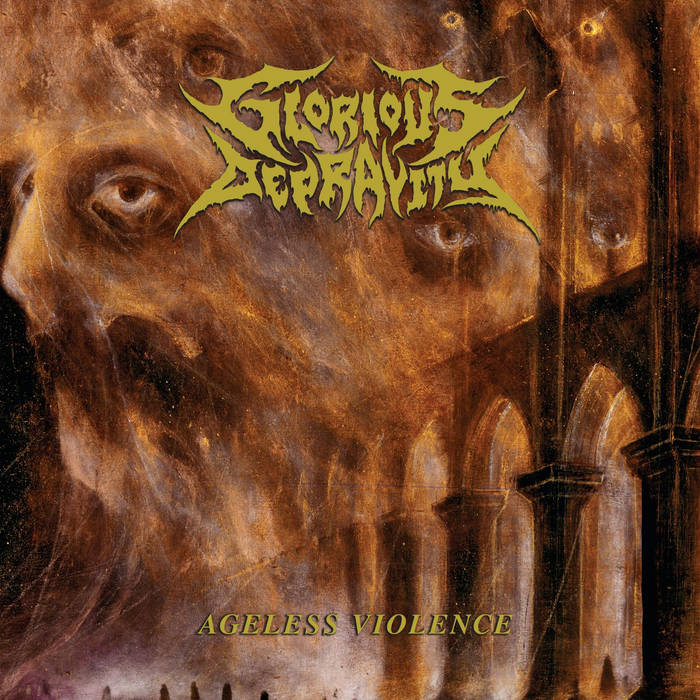 2020, the year of our demise, however, also the year of excellent metal releases like the one I'm about to review. Glorious Depravity, a relatively young death metal band from Brooklyn NY released their day-view effort by the name of Ageless Violence. What do we have here? Well, here we have a package full of death metal goodies of different flavors and textures that will delight the masses of metalheads craving for brutal chugs of violence.

When music comes straight from the heart and the only intention is to exfoliate all the anguish and inner struggles from the depths of our souls; that is when you feel the connection and uniqueness that is being transmitted. That's what happened when I first listened to Ageless Violence by Glorious Depravity. I truly felt the intention to brutalize the listener without any pretension. The riffs here are catchy as fuck and they are crafted in a way that after the record ends, you want to spin it again and again and again. There are two dimensions when you listen to music, sometimes, you listen to it as background "noise" while you're doing something else. Nonetheless, there are other moments when you listen carefully, and only then is when you discover details that make you spin the album endlessly. That happened when I listened to this record.

Ageless Violence is a collection of death metal songs that have little in common lyrically but has much in common musically. The common thread here is to express a unique kind of brutality and the band's own perception of death metal. Combining guttural grunts and mid-pitched screams to convey a sense of ugliness and extreme violence. Glorious Depravity seemed to love 90's death metal and they made it clear in the whole album, there are lots of nods to bands like Morbid Angel, Autopsy, Monstrosity, Cannibal Corpse, Deicide, Suffocation, etc. The songs vary from mid-tempo grooves to accelerations of brutality in tremolo guitar riffs which adds to a more compelling listening experience. Something that caught my attention was the kind of funny track titles that you can find here. For instance, tracks like 'Hospital Incinerator Blues', '(In The Clutches Of) The Oligarchic Exsanguinator', I don't know but those song-titles makes up for a crampy feeling to the album without ending up in something comical or cartoonish, if you know what I mean.

The production is pretty decent as well as the song-writing; these guys left me with a feeling of nostalgia for the death metal crafted in the early '90s. I am not talking about a copycat band that rips off material, not at all, I'm talking about the real deal, metalheads crafting brutal music for real metalheads. The album as a whole felt true and loyal to their musical roots, when I was listening, I was also thinking about what death metal records these guys worship and spin on and on in their daily lives.

Altogether, Ageless Violence was a very fun, entertained and nostalgic listen that makes me want to jam the record several times to discover references to the glorious 90s death metal bands. The music felt very organic, well written, and enjoyable in general and I will be going back to this album shortly. Indeed, I put it in my 2020 Top 10 metal albums because of what I've just said before. Outstanding tracks, in my opinion, can be the opener 'Oceans of Scabs' and 'Digital Reaper' but in general, the whole record is worthy of attention.

Coming out of New York is perhaps one of the year's releases almost lost in the death metal ground-zero-rubble. Glorious Depravity displays no shame when playing their iniquitous tunes on their debut full length album Ageless Violence. Fucking wanna tell me about a late commer to the party, these midnight crashers are up to no damn good on this just clobbering slob of death metal. Running for a total of around 30 minutes, Ageless Violence reminds us that death metal is very much alive and killing off the unworthy bands. These guys dropped a demolition piece that could not have come at a more unexpected time of the year to put the cherry on top of the shit storm that is......

Behold!!! 'Ocean of Scabs', what a way to kickstart your record; out the flesh-pit, glued to entrails and bodily fluids, this track clarifies what's being constructed in the concrete jungle, Brooklyn to be exact. Take Incantation, Immolation, Dying Fetus and blend them with just about any modern death metal band all about love for the old school way of doing things and this is what you'll surely get. And if you've got an appetite for any of this depravity, then tracks like '(In the Clutches of) the Oligarchic Exsanguinator', 'Ocean of Scabs' and my personal favorite 'The Stone Hammer Swings' will ensure you are filled to the rim with sick tunes till you start to vomit it all up. What a record; spanning death/doom, thrashing death, black/death and the traditional way of going about it all. Loud, muscular, throaty vocals supported with an occasional black metal hawk, equipped with drumming that keeps the momentum unbreakable and guitar leads that emanate and reflect the ominous artwork. Top-tier material here, more than worthy of crawling with the big worms.

What's great about Ageless Violence is that it doesn't feel like you're listening to the same song on repeat; instead every song sounds like a new chapter in the music that progresses with urgency and fluidity to the closing moments on the album. Much of that has to do with the experience behind the crafting of this iron-storm. Sharing members from Mutilation Rites, Belus and Woe (just to name a few), that instrumental savviness translates directly to the final outcome of Ageless Violence. Even though I'd pick a favorite it sometimes becomes unfair to the rest of the record given how good each song is. From the soloing frenzy on 'Forced to Witness' to the musical dynamics expressed throughout the album you'd be making a big mistake brushing Ageless Violence under the carpet or playing oblivious to what you're hearing from Glorious Depravity.

Out through Translation Loss Records on Vinyl and CD. There's a rotting in the Big Apple.