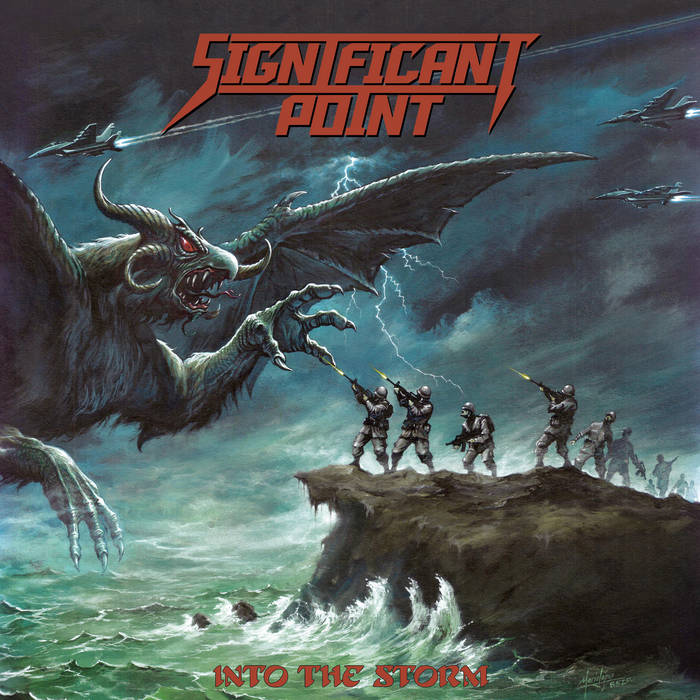 Since we've seen a lot of old school revivals in metal across the world, how 'bout we go to Japan and focus on speed metal this time around? Now, Japan are no strangers to metal music, some might say that they're a shapeshifting musical kaleidoscope, but sticking to metal, they've certainly done it all but as I mentioned, today I'm talking about speed metal, with the band Significant Point and their debut album Into the Storm, released through Dying Victims Productions.

Significant Point, are relative newcomers who hail from Tokyo, aside from this debut, they have a demo, a 2-track single and a live tape under their belt, pretty decent. Now when it comes to the music, Significant Point are indeed and unequivocally speed metal, and they relish on it. The album from front to back is filled with impassioned neoclassicalism, riffs upon riffs for days and the ever so mandatory soaring high-pitched vocals that would make the late great Warrel Dane in his Sanctuary days proud. And while the band can be guilty of some of the many stereotypes of speed metal worshipping bands as well as the notorious cheesiness of Japanese metal and hard rock, which I’ll get into later, the music does succeed at being both fast, catchy and even very technical and melodic. The performances of the band as a unit are what sells the album, and one of the aspects that truly boost those performances is the production, which sounds simultaneously clean and vintage, the band truly capture that late 80's sound, even while listening to the digital Bandcamp version I can tell this album should be played on a record player at full album.

As all speed metal albums worth their salt, the selling points are the guitars, drums and the vocals, and the band excels in all 3, in tracks like the opener 'Attacker', Gou Takeuchi and Kazuki Kuwagaki waste no time in grabbing your attention with their speedy dueling riffs and their virtuoso solos. The Iron Maiden-esque dual guitar play where both Takeuchi and Kuwagaki constantly try to outperform the other is consistent across the album, the bass work of Kazuhiro Watanabe is also equally good, while not as monumental as the guitars, he succeeds in matching their speed and keeping the rhythm in check, likewise, drummer Ryo Ito, aka "Itomentor" is. Like I said, the other major standout, as his intense and tight drumming is the backbone of the album as a whole, while the guitars carry the melody with the aid of the bass, it's the drums that serve as the backbone of the songs and where the speed is made. In regards to the vocals by George Itoh, I decided to talk about him last, primarily because he's listed as a guest vocalist, like the official members, George Itoh does a good job and his vocals are, as I mentioned earlier, soaring, they have the intensity of the aforementioned late great Warrel Dane and even some of the bombast of Bruce Dickinson.

As a whole Significant Point bring their A game and genuine passion and talent into a 44 minute distillation of the best elements of speed metal with a Japanese twist. Evidenced not only by the title track with Japanese lyrics, but also in how the band presents the album, anyone who's ever consumed Japanese media knows they have a certain quirk in how they create their art, and in music, particularly in metal there's a vibrant expertise in the performances. This album is no exception, it's both a labor of love but also clinically proficient, it feels rehearsed but in a good way, like the band recorded this album many times over to get the best result possible, and it shows.

But with all of that said, this album is not perfect and there's 2 major shortcomings which I alluded to in my second paragraph. The first one is the obvious, which is how while the band certainly display a reverence and enthusiasm for speed metal, and even bring their own cultural sensibilities into the music. They don't really push the subgenre and sadly fall victim to its biggest flaws which are being very one-note, repetitive and derivative. Now being derivative and carrying your influences on your sleeve isn't an inherently bad thing, sometimes passion can be enough to get by, but at the same time once you scratched the speed metal itch, the album doesn't really do much beyond just being a speed metal record. My second and final criticism is actually how cheesy this album is. Now, Japanese music is often mocked for being too over the top and too bombastic, as shown by acts like BabyMetal and Malice Mizer, and this band is no exception, while I certainly appreciated the melodicism and soaring riffs, some of the melodies get very close to being power metal, and of the very goofy variety. This can be heard in the chorus, main riff and solos of 'Run for Your Life' which in trying to be grandiose, it comes off as, like I said, very cheesy. The song would actually work great in a Fist of the North Star AMV. That same cheesiness is all over the title track, as the vocal work of George Itoh is very melodramatic and even though I don't speak Japanese, over-the-top pontificating is pretty universal and just by hearing the song, you can picture a dude on a cliff with flowing long hair singing his heart out with the setting sun behind, while a dragon flies dramatically in the distance. So yeah, very, very cheesy.

In conclusion Significant Point released a fun and catchy album that will please any and all fans of speed metal, and even hook up some newbies with the passion and proficiency alone, but for many veterans, including myself, this album is definitely good and entertaining but not a masterpiece, and we've heard better and more unique acts before all things considered.

Japanese band Significant Point has been around since 2011, but only now, ten years after their formation, managed to release their first full-length album called Into the Storm. The cover is already quite successful in my humble opinion. When I saw it for the first time somewhere a few months ago, I thought that I definitely have to check out the band.

Which brings us to the core of the matter - the music. Stylistically Significant Point sound like a mixture of Iron Maiden, Blind Guardian and a bit of Judas Priest, only in double or triple speed. The riffing of the guitars is arranged quite classically and the singer fits the songs quite well with his high voice. If I had to classify the album stylistically, I would say that it is a mixture of traditional and speed metal.

The song titles also fit this classification well, because 'You've got the Power' (cool Judas Priest opening riff), 'Night of the Axe' or 'Run for your Life' fit here like a glove. As I already mentioned, the band sounds clearly like Iron Maiden, here I mean especially the guitar melodies that always make me think of the older albums. From the vocal structures and song arrangements, however, Blind Guardian at their "Tales from the Twilight World" phase also often comes to mind.

The production is well done, maybe the drums could have been produced a bit more punchy, otherwise there is nothing to complain about here. The guitars sound pretty balanced and the solos the band presents us with are pretty impressive in places.

I don't know any song to recommend particularly, because all tracks are kept on a good to very good level throughout and don't let boredom arise at any time due to their varied songwriting. I have already found a classic metal highlight for me with Into the Storm, which will definitely find it more often in my CD player this spring. The album spreads good mood and party mood (even if that is with Corona at the moment such a thing).