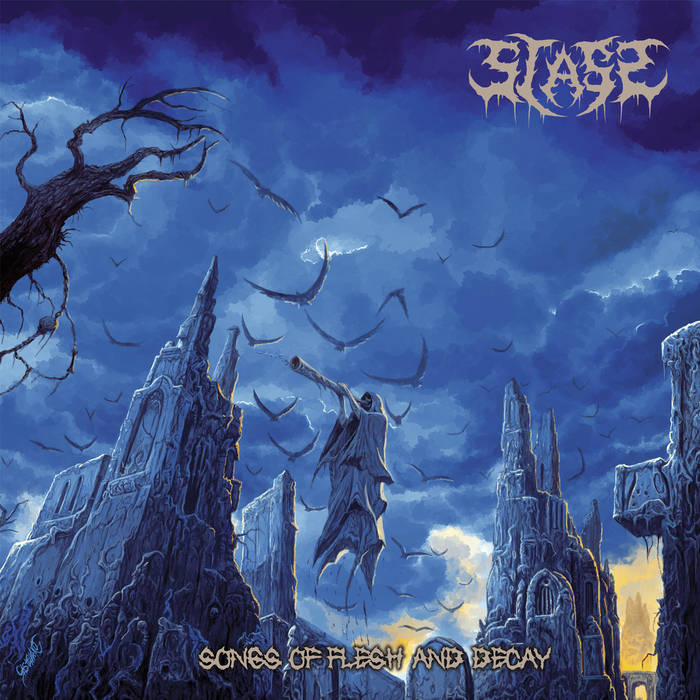 Type: Full-Length
Release Date: January 15th, 2021
Label: Emanzipation Productions
Genre: Death
1 Dreams Of Rotting Flesh
2 Forest Of Bony Fingers
3 Beneath A Darkened Moon
4 I Work At Night
5 Sounds Of Terror
6 Fear Of The Living Dead
7 As The Seasons Bleach Your Bones
8 Skin That Peels Away
9 The Skeletons Are Ready
10 Hatchet Lover
11 The Revenge Of The Bog (Sounds Of Terror II)

How many ideas does our well-known Rogga Johansson have floating around in his head every day? In any case, he doesn't seem to get bored, because with Songs of Flesh and Decay he releases what feels like 666666 albums. But wait - if you look at the name of the band ("Stass"), you will find terms from Swedish (state or plaster), but they don't really fit an old school death metal band, do they? So look further and if you take a closer look at the musician ensemble, you will find that Felix Stass (the singer of Crematory (Germany)) is a co-founder of the band. That seems kind of sensible then, but unless your name is Ozzy, Rob or Donald Trump, I think it's a bit self-indulgent to name your band after yourself.

The first disc of the band was not well known to me until I found it not really an earth-shattering release. A mixture of death metal and some gothic. Well, now I have the second disc called Songs of Flesh and Decay of the German-Swedish collaboration and I must say that the disc is an extremely cool increase to the previous album. What is offered here is Swedish old school death metal of the finest kind. The melodies sound like they were recorded in the early 90s, the guitars have a fat sawing sound, the drums are produced first class and Felix sounds like a proper death metal singer should sound (I think he has similarities to old Entrails or Lik in his voice). The melodies are very catchy and groovy, there are always cool solos built into the songs. Particular standout songs are 'Skin That Peels Away', a fat mid-tempo track that gets stuck right in your ear canal, 'The Skeletons Are Ready', a galloping track with a nasty Autopsy middle section; 'As the Seasons bleach your Bones', a song Dismember couldn't have written better - very catchy and melodic as well as 'Dreams of Rotting Flesh', here the guys really pick up the tempo and flatten everything with a real riff storm.

As musical references I would mention old Dismember, Entombed, Carnage or Entrails, but here the cat bites the tail. A very clear buy recommendation for the still young death metal year 2021, even if you do not like Crematory. Stass has as little to do with this as Sabaton with real heavy metal. Very strong album!!!!