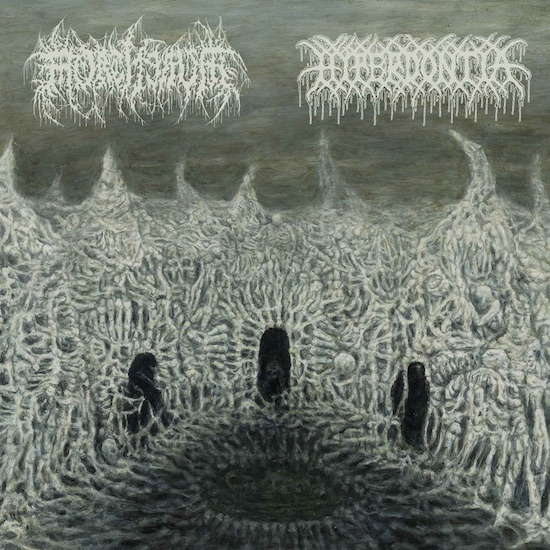 From a soup of mental disorientation, Mortiferum sprung "Altar of Decay" and man did they do some significant damage in the underworld of things. Word got out quick and that demo sold like crack in the 70's. Two years later we were hit with "Disgorged from Psychotic Depths", an album that did what many debuting bands fail to do after putting out a killer demo, and that's following up their embryonic discipline with an entry that would either show strong comparisons to or top their first moment of glory. Hyperdontia on the other side of the cognitive sewer were able to follow up their obelisk being Abhorrence Veil with Nexus of Teeth. Though not possessing the same ugly production as on Abhorrence Veil, it did manage to retain the primality of the Danish sect also involved with Undergang.

It would only be a matter of time before both Hyperdontia and Mortiferum crossed paths given the acclaim both have managed to garner in such short periods of time, and with everyone's eyes veering into the undersoil of metal, these two bands have used this time to capitalize with their seven inch split. Two tracks widening the rotten cavity of death metal, the first being handled by Mortiferum ('Abhorrent Genesis') and the act of finality being spearheaded by Hyperdontia ('Punctured Soul'). What can I say besides I wish it was longer. As though having not a hindrance and unaffected by the fuckload of this year's dung, both these bands bring something to the table that we all will remember for eternity.

Like shadows playing with each other in the dark, both Mortiferum and Hyperdontia present the listener with something condemningly and repulsively romantic. The artwork compliments of Chase once again provides the listener with a view into the serpentine thoughts captured and nurtured through some twisted death metal man-handling by both bands. From the stretching doom preceded by the eerie synth and carnal crush of 'Abhorrent Genesis' to the punishing thump of 'Punctured Soul', you begin to realize why these bands are at the top of everyone's thoughts in underground death metal. Like flesh blood and rotting matter merged together, this split is disgusting yet all the while attractive to the nomadic osdm junkie. Out through Carbonized Records December 7th 2020 on 7' vinyl and digitally.