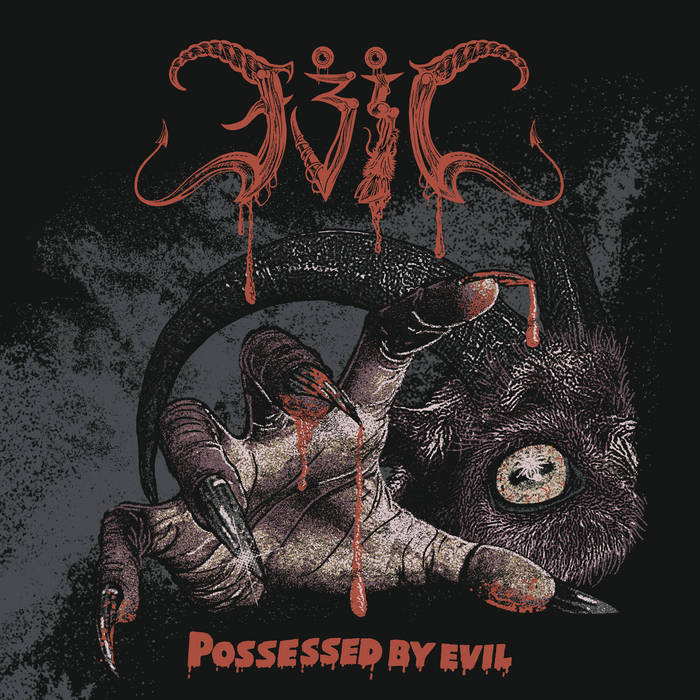 A Japanese band on Nuclear War Now! – this alone borders on cynicism. But August 1945 is long gone and there are more things on earth I will never understand. One thing is for sure, you cannot select more generic names than “Evil” for your combo and Possessed by Evil for your second full-length. Needless to say that the debut was called Rites of Evil and the here presented album offers four song titles with this seemingly magical word.

Perhaps right now you think that the formation from the Far East is musically very limited as well. Well, you almost hit the nail on the head. In their best moments, Evil celebrate a high quality orgy of one-dimensional black thrash. The drummer buys his kits by “Kamikaze Drums” exclusively – once these kits have been used for a recording session, they do not return alive. He prefers an ultra-fast approach and the minimalistic guitar lines channel his fury into the right direction. Tracks like 'Yaksa' or 'Revenge' are not too far away from crustcore or extreme punk. At first glance, they sound very primitive, but don’t underestimate their power and impact. These songs are reduced to the essentials and sometimes they add an extremely pathological touch, for example the sick solo at the beginning of 'Paramount Evil'.

However that may be, these thunderous high-speed rockets form the highlights of an album which also holds songs that tend to black’n’roll ('Raizin', for example) or intend to create a gloomy atmosphere (the beginning of the title track). These differently attacking pieces are solidly designed and maybe they are necessary to avoid an album which lacks dynamic. Anyway, the fascinating component in the sound of Evil is its radical element and it goes without saying that it gets most obvious the more the Japanese are hell-bent to fire from all barrels. At the end of the day, it does not matter. Possessed by Evil lives up to its name and there dwells an anarchic element in the fury of the sound that reminds me of the unconventionality of Venom’s “Welcome to Hell”. No doubt, Evil want to be very evil. This is probably not very original and maybe almost puerile, but I am fine with this mentality as long as the result sounds as glorious as the album reviewed here.

Finally, I have to mention two further positive elements. Firstly, the vocals, once often a weak point of bands from the Far East, do not lack rawness and volume. They are not very charismatic, rather pretty ordinary, but absolutely okay. Secondly, the production does justice to the song material. It has a noisy touch, but it catches the rage of the guys from Nippon fittingly. So if you want an album which frees the ear canals from dirt in a matter of seconds, this Japanese terror attack is for you, even though the closer cannot keep the quality of the previous songs.