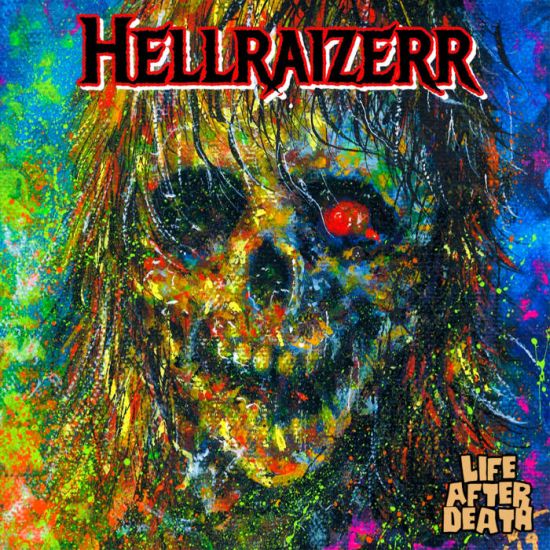 Death metal and even thrash metal have had a resurgence in recent years, but not many bands have played around with both subgenres’ predecessor - speed metal and while that subgenre isn’t dead, it certainly hasn’t had a renaissance like death or thrash have had. But that being said Sal Hellraizerr isn’t just playing speed metal, but, much like with Cursed Moon, he uses speed metal as springboard to mix things up and make them more interesting and in particular, Sal incorporates elements of death and thrash, and even synth music for a surprisingly bouncy instrumental track. Sal’s growling vocals are the main indicator of the death and thrash influence, in some areas they evoke Teutonic thrash metal a la Sodom and Kreator in their heyday, not to mention how effective Sal’s vocals work with the music and creating the atmosphere of an 80’s slasher horror movie. But going back to the music it's definitely leaning into pure speed metal and thrash metal with the marching drums, many, many riffs and a punkish bass tone. Solo playing which is primarily handled by Adam Axe of Brain Dead fame also have the thrash and speed leanings and all of them work excellently with each song. But this isn’t just a speed and thrash album as Sal brings various elements and influences to the table and among them are subtle elements of death metal. I already mentioned Sal’s vocals; he switches from shouted vocals to more nasal growls, which surprisingly don’t clash with the more bouncy and upbeat riffs and hooks, they mix really well, and this is where I noticed the other subtle death metal element, the production. The album is mixed in a way where all the instruments sound loud but clear and matching the intensity of the vocals, kind of like how Morrisound studio produced the most influential death metal records.

But by far the most unique element of the music is how 80's and vintage it sounds. This is where you know this is the same guy that stands behind Cursed Moon and this is how the album manages to evoke the style and feeling of 80s speed and thrash without just recycling what other bands already did. While the influence is certainly there, it’s not a rehash and Sal succeeds in making the music of this record sound as if it was written and recorded in 1987 but wasn’t released until 2020. It has that vintage sound but it feels genuine. Another unique aspect is how all the music and lyrics are horror themed, and again, with that very specific 80’s feel you get from watching the movies of John Carpenter or Lucio Fulci. Which brings me to what’s going to catch everyone’s attention when spinning this record, the instrumental synth heavy track 'Hellbound'. A two and a half minute of pure, genuine and unadulterated 80’s worship, and that mention of John Carpenter movies, also applies here because this sounds exactly like what the elder filmmaker would compose.

Overall Sal Hellraizerr continues to be an excellent musician capable of composing some truly memorable and catchy songs that sound vintage without feeling artificial or manufactured. The man clearly has a passion and love for all things 80’s and it shows. Furthermore, what’s the most enjoyable aspect of the album is how fun it is to get into. Most people associate metal with negative feelings or morbid sensibilities, and yes this album have a lot of the latter but it's still just a fun record and there isn’t anything wrong with wanting a good time that also has a good amount of shred and spooky vibes. It's a shame that the album came out in late November as it would’ve been perfect to blast on Halloween.

That being said, while everything about this album is enjoyable and true labor of love by Sal Hellraizerr, it unfortunately doesn’t completely erase the shortcomings that have plagued thrash and speed metal. Outside of 'Hellbound', the songs can feel a bit samey in some areas, also because of the nature of this album being a pastiche of 80’s horror and metal nostalgia, how enjoyable this record is, will vary from person to person. With the biggest element of that being the use of synths across the whole track list, as all songs feature synths at the beginning, during the choruses or at the end, so those who absolutely hate 80’s style synths would probably hate this record, but again that’s a matter of personal taste.