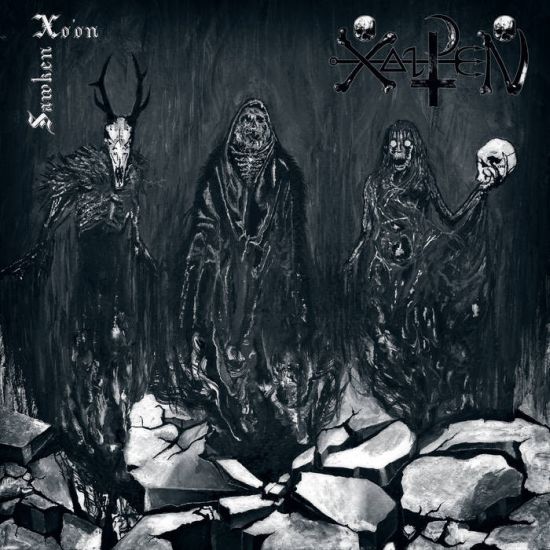 Chile is a country that has always had a long history when it comes to metal music, particularly extreme metal, and from the many bands and artists that have come out of that evergreen scene, today we have Xalpen, the black metal project of Alvaro Lillo; better known as the live bassist of Watain and a seasoned veteran of the Chilean extreme metal scene. Xalpen (pronounced Hal-pen) is the brainchild of the aforementioned Alvaro Lillo (bass and vocals) aka Tarem Keláash, and Juan Pablo Nuñez (guitars and vocals) aka Keykrók, and on 2020, after 2 EP’s, a demo and a split, as well as securing a full lineup, the band has finally released their debut full length album Sawken Xo’on (Tres Chamanes/Three Shamans).

Now, while most people would be familiar with Watain (and this project certainly has some similarities in terms of atmosphere and dedication to the occult) this is Lillo’s and Nuñez’s vision through and through and it stands on its own. In terms of the music, its classic black metal inspired by the second wave. Its dark, fast, very aggressive and has a cold and hateful feeling present, but what’s interesting is how there’s a distinct Chilean feeling throughout. I mentioned how Lillo is a seasoned veteran of the Chilean scene and that’s evident here, as the playing and compositions have a clear influence of Chilean thrash and death metal. Unsurprising given how the bands Lillo played with that preceded his tenure in Watain; Execrator and Undercroft were death metal bands. Thrash and death influence manifests itself in the way of how all the songs are very guitar and bass driven and the speed is the main focus. With the most important element being the riffs, each song is based around distinct riffs and/or melodies. This is where the album is very much a black metal album, because by keeping the song structures and compositions simple, the band added other elements like ambiance and backing vocals to create a dark and ritualistic atmosphere. This can be heard in songs like the title track, 'Devourer of Light', and 'Among the Pillars of Death', where the blistering speed and thick riffs are complemented by the atmospheric elements without having to switch between them. The band never loses momentum and all fits perfectly.

The vocals which are shared by Lillo, Nuñez and new member Joseph Merino of American band Škáŋ, alongside backing vocals of “Herrnash” are the major factor in holding the music together, which is very appropriate given the band’s concept and spiritual leaning. These are less black metal vocals, and more like ritual chants, and the music is the medium that carries these chants, but even without going into the nitty gritty of the band’s occult nature, the vocals are still something unique. Lillo obviously takes the lead, his shrieking howls and grunts, alongside Nuñez’s growls are what basically sells the album, as they take the forefront from beginning to end and at no point do they feel wasted; the music is already very strong in that regard. Also, at 46 minutes, the album has the perfect length as it’s long enough to settle in its groove without feeling bored or exhausted, and that’s admirable since most songs clock over 5 minutes with the two longest song being under and over 9 minutes. The band successfully goes in and out without rushing or dragging, the mark of a well-paced and composed album.

With all that said, the album isn’t perfect. The first issue is the music itself and while it is good and well played, the band doesn’t really reinvent the wheel of black metal and do rely on a very specific formula which at worst also makes the album somewhat uniform. It is a good thing since the album is consistent from beginning to end, but it also means the album could be monotonous on repeated listens (an issue the band also faced on their previous EP's). However, the point of this band is their concept, the music is a means to express their message of ancient Shamanic traditions and the occult and to turn music into a manifestation of chaotic energies, which is respectable. There’s also something unique about hearing black metal that takes their cues from South American indigenous spiritism and old magic instead of just Satanism or European Paganism. The other issue is actually the production, which is very, very bass heavy. While it’s not the worse since all the instruments and the vocals are audible, the lead guitar is actually buried under the bass, drums and rhythm guitar, to an extent it feels like the album is louder than it actually is. It puts this album in a weird position as it’s too familiar for seasoned metalheads but too inaccessible for newbies, which makes it difficult to recommend. But all in all, what matters in the end is the actual music which overall is still very good, and I do recommend giving it a shot to any and all people who enjoy classic raw and fast black metal with a ritualistic twist.