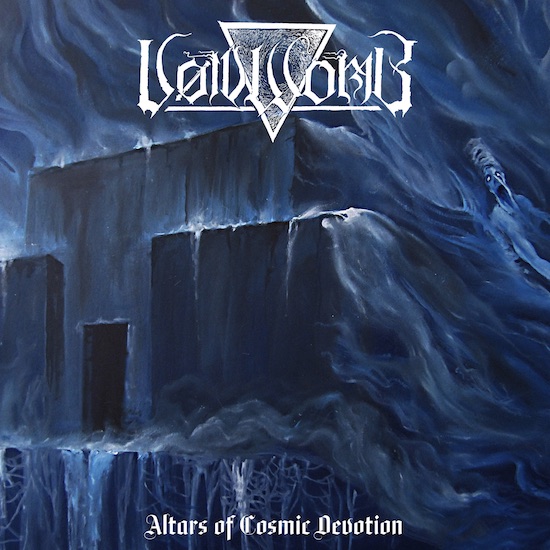 For a debuting band and a EP this is shockingly well put together. The formation behind VØIDWOMB has an impressive piece of work under their belt on Altars of Cosmic Devotion. Everything about this little package speaks volumes about the future of the band which seems to be pointing in the direction of longevity and prosperity. Far too good to be taken lightly or overlooked, this EP signals a new dusk upon the underground.

Augmenting the principalities and powers of 90s blackened death metal with their régime of occult driven death metal the format steps over its DNA boundary to create a bastardized form of black/death metal. The production is crisp and beefy, it'll have you sticking your lips out once the bass lines hit and as for the riffs, they scorch. The drumming acts in a very advantageous manner, using every available moment to fully capitalize on the rhythmic movement to the point of conjuring a trance-like momentum. A track being 'Summon of Utu-Shamash' would gradually build to a black metal tremolo driven climax while certain sections on 'Descent To Ersetu' hit you in the face with immediate burst of black metal before dragging you back to a somewhat mid-paced groovy build of death metal. The contrasting vocals shower down on all entries and add to the dynamics of the music thus aiding in the easy conversion and transition amongst blackened black/death.

To some degree Altars of Cosmic Devotion appear a bit reminiscent of Rites of Daath's "Doom Spirit Emanation" or Nekus' "Death Nova Upon the Barren Harvest" in the slower and mid-paced parts, plus the production is strikingly similar to that used on those albums. Another noticeable trait on Altars of Cosmic Devotion is the fluidity of each song. All entries play like extensions of each other so you never get the feeling the record is just a collection of songs; rather a concise, sound and meticulously crafted effort walking a tightrope between blackened and black/death metal towards its destination. Promising indeed and there's no surprise Iron Bonehead would conspire with something this sort. Keep your eyes fixated on the stars.