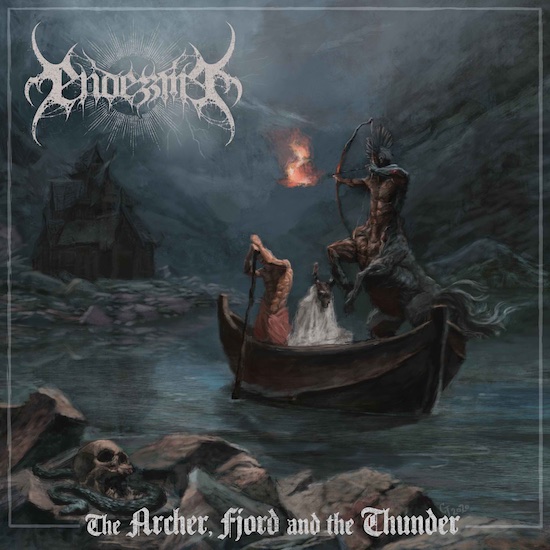 Norway, once a leader in black metal, is in a sad state. Although they can boast a beautifully antisocial black thrash scene and even a flawless thrash horde can inspire (Shakma). But the black formulas are apparently no longer taught. At best, the old heroes stick their heads out of their snowy forest once a decade (Ancient, Immortal). Therefore the field would be free for the generation of the sons of the second wave heroes. So, does it work? Not really. Endezzma drop by and impressively show that at the upper end of Europe have shifted to producing average stuff. The beginning of the album is terrible. Hectic guitars, a robotic double bass and a vocal line that makes sudden deafness seem like an interesting alternative characterise 'The Name of the Night Is a Strong Tower'. The relatively modern production and the soulless hammering of the double bass don't allow the piece to develop. Next song, same problem. Endezzma obviously think that stormy vehemence alone gives a track depth, atmosphere and power. But that is wrong.

After this introduction I would have preferred to sedate myself with two hours of "Hell Awaits" or "Seven Churches". Seriously, this is the Norwegians' third long-playing record and no one notices this lack of compositional skill? Amazing. But I admit I would have missed a respectable increase in the band's performance if I had stumbled into the nearest bar after the intro and the first two songs and got drunk (but you can't anyway, thanks to Corona). With the title track, the squad creates drama, grandeur and emotion for the first time. Typical Nordic riffing opens the piece in mid-tempo. This approach leaves room for the voice for the first time and one actually perceives something like expressiveness. The tempo changes fit, the one-dimensionality of the first pieces is overcome and especially the incantations from 2:34 minutes on - also with the support of keyboard effects - are magnificently staged.

The title track pushes open the door to the best part of the record. 'Formless and Void' also opens with a blunt but good guitar line and the chorus almost gives the song another dimension. A piece like this would often have done Gorgoroth good. At the latest with 'Garden Ov Heathen' a pattern emerges: whenever Endezzma don't just beat up on their instruments as if there was no tomorrow, musically appealing, atmospherically successful pieces emerge in the process. Why not like this right away, the impatient listener asks himself and unfortunately gets no answer. And that’s not all. From song number eight on, the glory is over again, everything comes to a solid but unspectacular end. Sporadically, the one or other melody line stands out, but such an ingenious background melody as the whimpering keyboard performs in 'Wild Glorior Death' from 3:05, does not appear again. What remains are four top tracks in the middle of the album. Could have been a good EP, but became an ambivalent long player. This can't really improve the state of Norway.