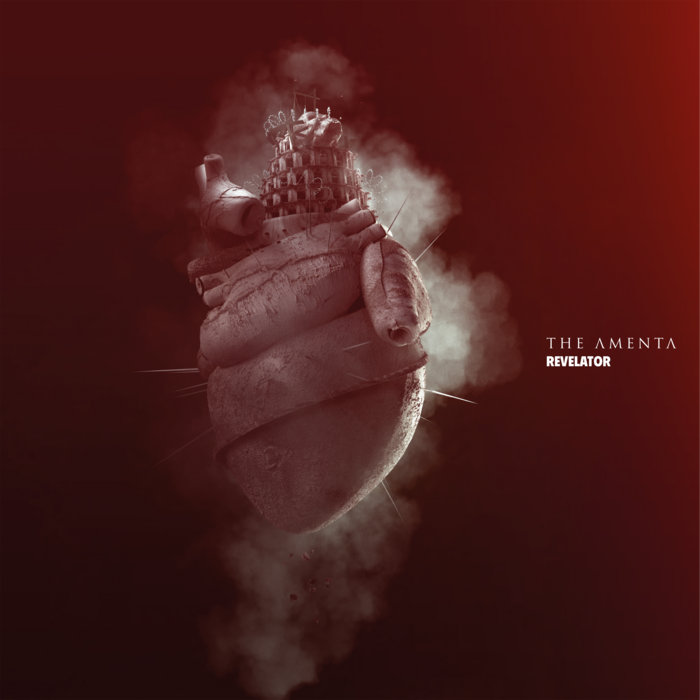 I'll admit industrial metal isn't typically my thing, but The Amenta are far from a typical industrial metal. If anything, they're a great group to point to when people bring up the limitations of such styles of music. One of the common criticisms of the style is the lack of genuine human emotion that comes out of the precise, dry and choppy industrial-style guitar and drum work, something The Amenta has always been easily able to navigate around because of the attention to detail in the soundscapes that surrounds the peripheral of the music.

Timothy Pope is arguably the most essential contributor to the band's overall vibe, being one of the only two founding members remaining, and having an approach to keyboards that is entirely his own concoction of sampled sounds and effects that he programs to give the most unsettling vibes possible. Fortunately, the keyboards never overtake music to the point where they're the only thing contributing - one thing I've always appreciated about The Amenta is that they don't forget the "death metal" part of "industrial death metal".

The Amenta's atmosphere is calculated, sleek, sophisticated and slightly manic at its edges, which is, interestingly enough, a departure from a lot of the more exaggerated, tongue-in-cheek themes that industrial DM bands such as Strapping Young Lad, Anaal Nathrakh and to a lesser extent The Project Hate MCMXCIX use. Not many bands that go for the "trans-dimensional being attempting to communicate to humans" approach do it with the same sort of deadpan seriousness as this group of strange Aussies. Usually it feels like a caricature, but The Amenta has always felt more...genuine? Realistic? They aren't guessing how an interstellar being would communicate to us and trying to replicate it...they've heard the message that they're trying to send to us, and it turns out aliens have really, really bad intentions for our planet.

Because The Amenta uses such unique building blocks to make up their foundation, they have a near-limitless palate of original ideas to explore, and they take full advantage of this by thoroughly reinventing their sound with each album. Occasus was the overwhelming, riff-saturated introduction to the band, and n0n took the core sound as far as it could go by spending an insane amount of time crafting each song's little intricacies (past interviews indicate that the keyboards took a total of 18 months to record). Flesh Is Heir added more humanistic, emotive elements to the base.

Revelator takes an even bigger step and completely inverts the foundation. The immersive synth textures, and the spacious, wandering compositions are the most immediately noticeable aspects of the record. It's not immediately noticeable, as as opener 'An Epoch Ellipsis' starts out with exactly the suffocating intensity that this group is known for, but even that song shows The Amenta (vocalist Cain Cressall in particular) using a more diverse toolbox and the production allows for some breathing room between the instruments. By the second track, they're already delving into strange, monotonous chants over a rock beat. Revelator dials back a bit of the crushing heaviness of their older work, doing so in order to branch out into eerie, unsettling vibes that creep into your brain with more subtlety.

Longtime fans might be taken aback by the lack of suffocating, pulverising moments, but it's a natural byproduct of the songs extending their range of motion and taking some extremely daring risks - there are moments such as 'Twined Towers' that wouldn't sound out of place on an alt-rock (or dare I say nu-metal) album without the keyboards swirling around, but in the context of manic, rapid-fire deathgrind that surrounds it, it's a perfect, even if a somewhat jarring transition.

This is the kind of ambitious, expect-the-unexpected album that should only be pulled off by musicians that value their vision more than any preconception of genre - and have the chops to pull it off. Dave Haley and Cain Cressall in particular are nothing if not seasoned pros in that regard. Haley holds the album together and keeps up the frenzied energy with his tight speed, while also demonstrating a much wider skill set in restrained, simpler beats than one might expect if you're familiar with some of his other projects such as Psycroptic and Werewolves. Cressall has a vocal performance that has some slightly off-putting and abrasive feelings to it, but slowly you become accustomed to it. Eventually, you'll be taken aback by the widely different range of vocal stylings he attempts, from high shrieking to a throaty, Gojira-esque yell to lower growling to clean singing, with tons of post-production layers smeared overtop at different times to add grit and effects. The power of these two put together make even the most uncomfortable moments on this album intriguing, because they're delivered with precision and zeal.

Long story short - if you described what this album sounded like to me, I probably wouldn't listen to it. The Amenta makes a lot of bold moves: fusing several disparate styles together, no two tracks sound the same, you never know what's coming next, there's tons of off-timed chug grooving and some crooning...and to my surprise, they put together an album that I not only want to listen to, but something that grows on me and reveals new surprises with every subsequent listen.