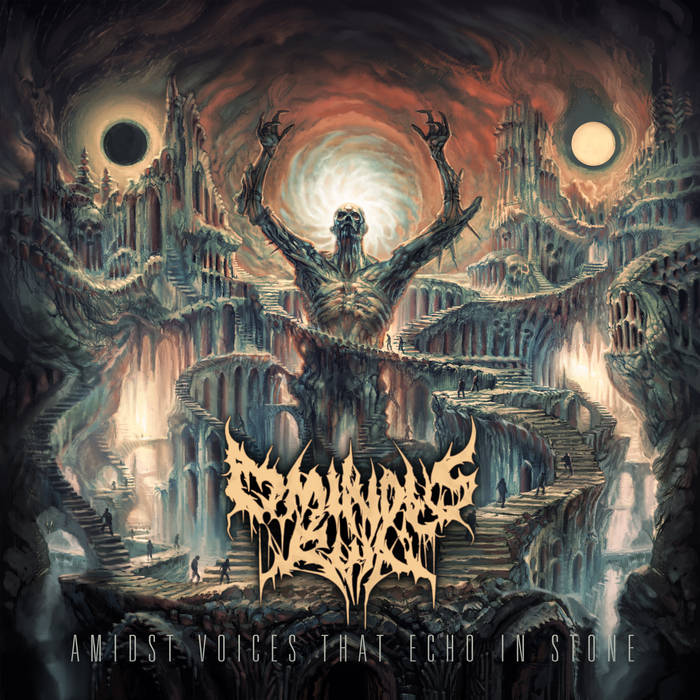 You have no idea how long I have been waiting for an album like this. If there’s one trend that I desperately wish lasted longer, it’s mid-2000s California tech death. For a few short years it felt like there was something in the water that made the ability to sweep pick remarkably easy (in addition to making later-era Death make sense), and Deeds of Flesh spearheading Unique Leader helped to bring bands like Decrepit Birth, Odious Mortem and Severed Savior into the forefront of death metal. Those three bands released albums in the mid 2000s that have a certain boundless energy to them, a freedom that could only be harnessed back when “technical death metal” was more of a buzzword than an actual codified subgenre.

Diminishing Between Worlds, Cryptic Implosion, and Servile Insurrection and a couple others all came out of that region and time period, and even as more and more guitarists with absurd technical capabilities begin to pop up and those three bands either added extra elements to the template in their later work (or just split up in the case of Severed Savior), that short little while when the style was the hot topic birthed a few albums that absolutely smoked in a very different way. Because tech-death as a whole shifted to incorporating more progressive, ambient elements to balance out the hyperspeed spider fingers, the Californian style fell out of favor a bit. The modern bands that did carry the tech torch such as Archspire, Wormhole and First Fragment took things in a more slam-infused and/or neoclassical direction. But then, Amidst Voices that Echo in Stone drops and suddenly it’s 2007 all over again and I’m getting absolutely dicked by tapping riffs nonstop.

This album is a great example of execution over innovation. Ominous Ruin are very representative of the region and scene they come out of - there’s half a dozen bands in their area alone that are in the same sonic ballpark as them. However, because the performances from every single musician are on point, the lack of originality does not in any way affect the quality of the end result. They did tweak the formula a bit - the polished bass tone is something that was more a part of tech-death after Beyond Creation came on the scene, but it adds a wonderful extra component, and Mitch Yoesle is no slouch - check out ‘Simulacra’ for a real showcase of what this guy can do. Even outside of that song, there are many times where I’m saying “holy hell this guy is amazing, how is not more known” to myself, and I gotta say they pick the right moments to let him take center stage. It’s not on every track, but it’s enough that its presence is felt.

Really, that’s kind of a theme for the album - every musician has me saying “why are these guys not more known”. Whether it’s the choppy, varied vocals that have the speed to keep up with the riffs and occasionally verge on Archspire territory or the creative, ever-changing drumwork that never lets up on the intensity but still feels big and spacious, there is talent oozing out of every pore of this. The ridiculous musical prowess present combined with songs that jam all the best features of those abilities into songs that don’t take two or three listens to fully grasp, but still have more than enough going on in them for some serious reply value. There’s more than enough variety, with some songs even verging on the longer side and adding more vacuous atmospheres without losing that salad-shooter, “crazy riffs that are catchy for two seconds until the next riff obliterates them” feel.

Ominous Ruin is the punch in the gut that tech-death needs right now. Most of the genre right now is focused on dizzying dissonance a la Imperial Triumphant or more atmospherically-inclined virtuosity like Fallujah and Myth of I, and it’s making for a critical shortage of big, brutal riffs and sick sweeps - tech death the way Deeds of Flesh always imagined it.