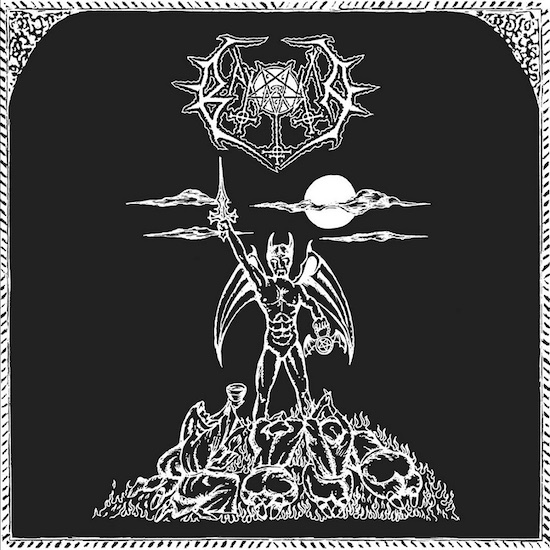 When symphonic black metal provides the scene with the four-ply toilet paper, then Baxaxaxa are the community's sandpaper. A recently hyperactive greaseproof paper. Normally it took the band at least ten years to find the record button in the studio, but now the production is running at full speed. Two new songs greet from some swampy morass of Hades. The sound may be a little less rough and raw than on The Old Evil, but by its very nature it still moves in a completely different galaxy than any form of glossy black metal. The guitars still sound like a bastard from Bathory's "The Return...." and a Moonblood recording and their mighty appearance sidelines both vocals and drums. But this is rather part of Baxaxaxa’s nearly prehistoric concept than a defect. The band is focused on a mighty atmosphere and the dudes are not afraid to use keyboards from time to time in order to reinforce the hellish vibes of the material.

Both tracks deliver accessible patterns. The A side offers an almost complex structure, but don’t worry, nobody is intellectually overstrained. Moreover, despite the meticulous design of the tracks, they never lose their aura of primitive brutality. I am sure the guys work with enthusiasm - which I only get up to a certain degree. No doubt, Baxaxaxa do not disappoint, but the intro of the title track is a noisy waste of time and A side and B side of the 7” miss an iota of compositional greatness. Please understand me properly - there exist definitely worse things than worshipping Hellhammer’s pioneer works and especially 'Revelation in Sin' gives a delicate foretaste of hell. Its guitar lines reflect cruelty, intransigence and it seems to be only due to an unexpected coincidence that one or the other melody-like fragment got lost in the song. Nevertheless, I am sure that Baxaxaxa have more skills than they show here. However, it is also clear that sandpaper can be an important thing every now and then, while four-ply toilet paper is always for asses and shit.