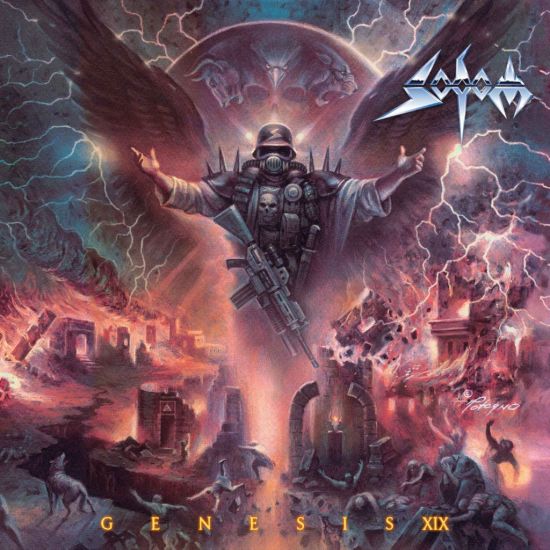 Finally, the long-awaited new Sodom album is released. After the split with Makka and Bernemann and the new line-up, including the comeback of Blackfire, a lot of speculations if the band could keep the quality of the last records were made. So let's have a look if they still are as good as we all hoped for or if Genesis XIX is a huge disappointment.

At first, I focused on the obvious, the cover and booklet. The cover is made by Joe Petagno who also created the last few covers for Sodom releases. So we all know what to expect. In the booklet you can find the lyrics of course and some photos. Well, I guess some of them should not be made when you reach a certain age (maybe for the family album when you are at the beach but not for public…) but most of them are quite cool and “evil”.

But even though Sodom might be too old for some kind of photos they are fortunately not too old for great music. The album starts after a short intro with a ferocity we are used to know by them. The tracks are kept very varied with a lot of twists and turns inside and you can say that there is no really big surprise concerning their style. It's business as usual, but don't misunderstand me; it is what the Sodom fan wants and gets. Sometimes the riffs are very similar to some Norwegian black thrash bands (Aura Noir, Infernö (please release another album!!)). They sound dark, fast and heavy and are something what you can call a bow to their own past, whereby past means here the 80s. The drums match perfectly with the guitars, there is no mismatching sound nor any disharmonies and the interaction of the instruments combined with Angelrippers angry growling voice is immaculate. Almost all songs are on a very high-quality level and in my opinion Sodom performed some of the best and fastest tracks for many years on this release. Besides this, another reason for recommending this output is the fact that there are a lot of twists and tempo variations in all tracks that make this album very varied and include a lot of surprises.

I would like to mention some tracks which are maybe a little bit more remarkable than the others. The first one is 'Occult Perpetrator', which somewhat sounds like a mixture of 'Remember the Fallen' and 'The Saw is the Law'. 'Nicht mehr mein Land' is a song in German language which starts very slowly and begins to explode at the last minute. It is a track with an interesting political message about racism, selfishness and ignorance these days. 'The Harpooneer' is a very varied song with a lot of breaks and surprises, a very thrilling track. 'Indoctrination' is a little bit different from the rest, it is somewhat punk-style with some gang-shouts and could have been on Get What You Deserve.

The last thing I frankly want to mention is the production. It is very pressureful and well-balanced like on the last albums so that you can enjoy this masterpiece the whole 55 minutes. It is like a wrecking ball that smashes a house without remorse that leaves you stunned and with mouth open. I listened to it several times now and I still discover new facets and subtleties in the tracks. To sum up my statement from the beginning: it is not a disappointment but really a must-have album in my eyes, one of the best thrash releases this year and without any weak tracks.

The history of Sodom and Tom Angelripper in particular, is full of peculiarities. It starts with the fact that he had no hand free on the moped to bring the freshly bought bass home safely. Another time Tom was left at night and fog by the tour bus at the rest stop. Needless to mention that he wore the most ridiculous clothes ever when this happened. And most importantly, he was working with this weird dude called Bloody Monster, though not for long. Now Tom and the new team are writing the next chapter and in fact the new album is called after a chapter, one of the first books of Moses. Genesis XIX tells about another Sodom and is not uninteresting either, but I want to concentrate on the twelve fresh songs of the band from the Ruhrpott. By the way, “band” is just one of many terms one can use for Sodom. The guys are institution, legend and influencer at the same time.

First things first, Genesis XIX shows no signs of leniency. Tom, and that’s the most significant difference between the German Lemmy and the original one (R.I.P.), always stood for a higher level of aggression and musical vileness. The new songs break up every crust and they develop a gargantuan heaviness without sacrificing speed. While listening to bullets like the mean, straight and fast-paced 'Glock ‘n Roll', I ask myself what the whole discussion about old Sodom or new Sodom is all about. From my point of view, Angelripper’s team have always remained true to the spirit of this band, regardless of the constantly changing line-up. Yes, the band (institution, legend and so on…) flirted with punk and albums like Better off Dead showed a marginally less heavy orientation. Nevertheless, “masterpieces” like Endorama or "The Least Successful Whatever" have been released by other well-known Teutonic formations.

In contrast to this, Sodom never fell victim to this commercial form of fickleness. In all honesty, for me no such thing like old Sodom or new Sodom exists. There is just one Sodom and that’s the name of the best combat unit of Germany’s legendary legions of the early and mid-eighties. In its wildest moments, Genesis XIX, which is unfortunately punished with one of these mega-boring Petagno covers, offers blast beats driven (death) thrash that bubbles over with energy. The most raging parts of 'Dehumanized' explain explicitly what I mean. I don’t know the exact number of drum kits that were destroyed during the recording of the album, but I am sure that the personified insanity behind the drums, also known as Mayhem’s Hellhammer, would be proud of Toni Merkel’s incredible performance.

Anyway, the less rapid tunes like 'Occult Perpetrator' (the unofficial successor of 'Strange Lost World') also add value to an output that does not suffer from major flaws. Only two rather dispensable songs show up. It's surprising that 'Euthanasia' falls short of expectations. This piece is rabid and merciless, but it lacks a central theme and as soon as the next track begins I cannot remember just one tone of it. Without recognizable resistance, the song falls prey to mediocrity. 'Indoctrination' comes through the door with a usual guitar run, which has been heard a thousand times in one way or another. The song appears as the somewhat uptight attempt to remind us of the band's punk affinity. The quartet presents primitiveness at the push of a button, so to speak, but unfortunately punk does not work head-controlled. So what, maybe these titles only give reason to complain because of the great quality of the rest of the material.

Just take the title track. I heard it in 2019 for the first time when checking the Out of the Frontline Trench EP. Honestly speaking, it did not make my day and I was surprised that this pretty average tune should be the representative of the coming new album. But here, in a new configuration, this song is rising like Phoenix from the ashes. It’s almost progressively designed and it combines heavy mid-tempo parts with speedy eruptions full of anger. The chorus mills into my auditory canal with unexpected vehemence while crowning the entire song masterly. Nevertheless, the best is yet to come: despite its high quality, this is no outstanding song in a narrow sense, because the majority of the pieces reach the same excellent level. Already the next track, 'Nicht mehr mein Land', is the next highlight, not only because it's chorus turns out to be an earworm. It spreads fatalistic yet violent vibes and relies on a mid-tempo approach without ignoring velocity completely. For all of you who want to know what the German text says, but can't understand it, I have good news: as a native speaker, I don't understand it either. Tom is unhappy with something (so far, so logical), but what exactly he wants to change in Germany remains his secret. In the end he uses a fighting slogan, which is also popular among the far right. But no question, Tom is no political dud or extremist and one cannot reduce the lyrics to the final line. He describes himself as neither left nor right and I think that is not unreasonable.

I should finish before my keyboard explodes, but my personal highlight may not remain unmentioned. 'Sodom & Gomorrah' brings me to the edge of madness, because it demonstrates how much strength is in well-designed, fast, simple and catchy neckbreakers. Of course, one can say that this track does not offer something new, special or groundbreaking. But heavy metal is the cultural child of the working class and this class also cannot be described with these attributes, but with other, mostly positive terms. 'Sodom & Gomorrah' is the perfect antipode to excellent monuments like 'The Harpooneer' or the aforementioned title track and the equally simple structured 'Friendly Fire' closes the circle of an album which is really impressive. How many formations have the skills to fire such a rocket into the orbit when it comes to their 16th studio album? Angelripper is a phenomenon and maybe almost the same goes for Frank Blackfire who has become a very relevant factor in the line-up as well. No doubt, this explosive full-length after such a long time in business is the best peculiarity Sodom.

PS: Don’t hesitate if you have a chance to listen to the non-album track 'Along the Path to Hades' – it’s another powerful and very competently thrashing piece.