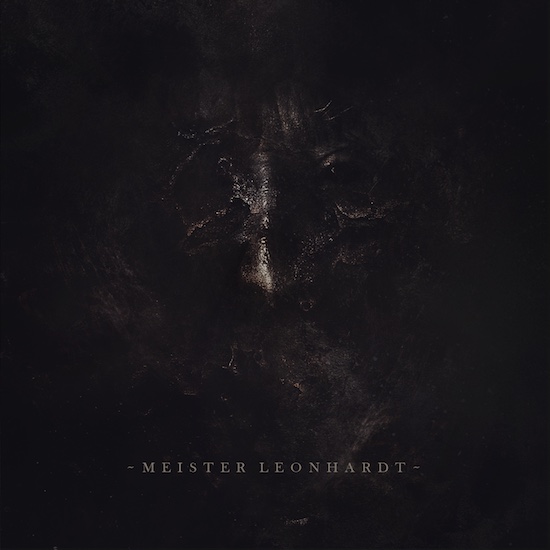 Promising newcomers are the elixir of life in every artistic direction and therefore a debut like that of Meister Leonhardt is expressly to be welcomed, even if the artists behind it have been in the business for a while under other banners. The name of the band refers to a gruesome novella by the author who also wrote "The Golem" - so everything stays in the family. Unfortunately, the group from Russia doesn't treat us to a full album. But in the golden eighties, EPs were a popular way to test the market, too. So maybe this is just a traditional approach of saying hello in the scene.

After all, Meister Leonhardt let us participate in their sound art for 26 minutes. The whole thing is introduced by a shuddering keyboard intro that excellently prepares the listener for the essentials. Even Summoning couldn't have done a better introduction. The self-titled disc then offers five atmospherically dense pieces, some of which have a Burzum-esque, melancholic touch. In particular 'Thirst and Spiritual Infirmity' would have been a very good addition to “Filosofem”. But there are fast-paced, more aggressive tunes as well, for example 'The Crown…'. Its rawness is a characteristic feature for the entire work. In view of this, even the slower songs like the mid-tempo jewel 'Of Things Never Finished' will not make it easier to convince your girlfriend of your romantic side. Each and every piece has a fiery core and the fact that sometimes the guitar lines appear almost in a primitive way does not mean that the songs are undemanding in any way. The (rare) breaks are well integrated, no track has become too long and the vocals deliver exactly the quantum of misanthropy and vileness which is always welcome.

No doubt, Meister Leonhardt does not make things by halves in terms of quality. Those of you who like their kind of black metal filled with hostility, isolation and suicidal emotions can note a new name on their shopping list. I have already done the same. The Russians have a knack for almost opulent, but never pompous melodies. These melodies are in a constant battle with the wall of sound the band is creating simultaneously and the result sounds fascinating. There is still room for optimization, but despite or exactly because of this fact, it would be great to read about the release of a Meister Leonhardt full-length soon.

Meister Leonhardt is 'too old, too cold'. Embracing the creaking remnants of the elder ways of 80s-90s black metal, the project with this self-titled debut racks-up around 27 minutes of sonic antiquity, drags you back through the chilling snow and winds to an honestly bleak and hateful period in black metal. Sounds as though it's meant to be experienced in a cave in the forest 100 miles away from civilization amongst the howling wolves and only the caress of blistering cold winds of the season.

These tracks are handled with infant-like or ancient architecture-esque care as though uncovered by an archeologist under 200 feet of rubble. 'The Coldest Fire' would apply it's opening ambience as a tool to glaze the atmosphere a bit for 'The Crown of Consenescence' to begin its embark with the listener to a grim place. Meister Leonhardt is 1st wave rocking style black metal merged with some sprinkles of the early second wave and black/doom metal that brings to mind Darkthrone ("Panzerfaust" era) among numerous others. Songs here are very guitar driven but leave enough space for the drumming and vocals to go about their tasks. Plenty of great hooks and leading riffs featured on the album with 'Of Things Never Finished' and 'Thirst and Spiritual Infirmity' providing mesmerizing rhythms and auras.

These 27 minutes go by fast and is perhaps the only drawback of Meister Leonhdt. One more song would have been a good addition but even without such, the album possesses enough meat to keep the hungry fed. Can't help but re-emphasize how delicate Meister Leonhardt sounds and feels, most of which could be attributed to the pacing and melodies used that are so delightful to the ear. 'The Greatest of Circles' is one of the best songs on the album that merges all its rocking roughness with crescendoing rhythms, hooks and ambience in the back. And in ending so suddenly, you'd want to instantly commit to another round. Look out for Meister Leonhardt that comes out on Purity Through Fire January 31st, 2021 on vinyl and cd.