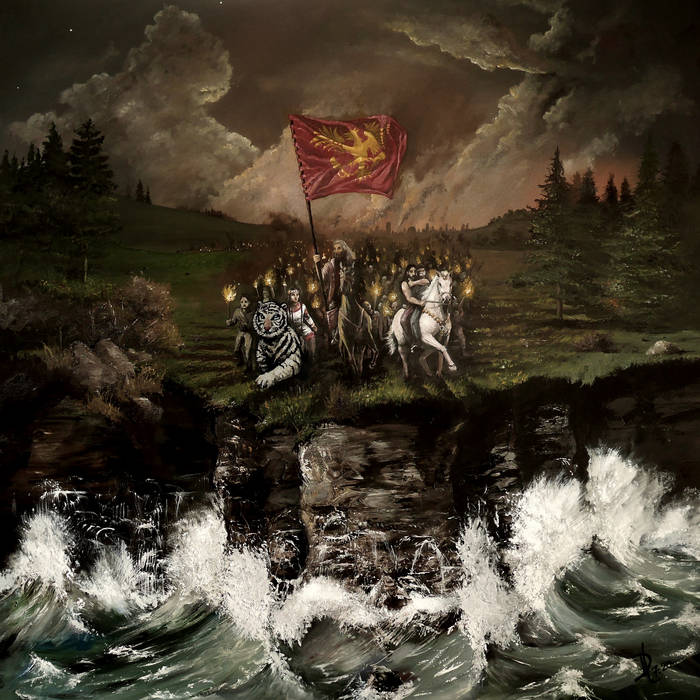 It seems that this year I should be happy with more interesting sounds coming from French metal scene. And I really didn't have to wait long as already in the first month I'm getting a new album from Les Chants de Nihil.

French metal scene has always been known to have some bands pushing the borders of metal, I've always followed bands like Misanthrope, Symbyosis or even Fange, who always produced something unique. When I heard of Les Chants De Nihil they sounded to me as a more aggressive kind of black metal band, closer to VI, but with more catchy elements, sometimes similar to what we could hear on the last Aodon's album for example.

To give you a little introduction, Les Chants De Nihil started as quite raw black metal band, which after one EP and one full album started adding more and more elements to their music, starting with some keyboards and folky elements on Propagande Érogène and Armor. They expanded their musical spectrum by adding disharmonies, progressive and experimental elements on Dix Ans Et Demi De Lutte Contre Le Mensonge, La Stupidité Et La Sobriété and they continue perfecting this mixture on their last album. When I heard it the first time, I decided to go through their whole back catalogue and I'm sure I'll be listening to everything they released since 2011 many times more from now on.

The only change in the band's line-up since their previous album was a new bass player. Normally it wouldn't be that noticeable change, but if you listen to their previous albums, ÖberKommander had quite big shoes to fill in. The rest of the band stayed the same and I guess this shows that now they've reached the next stage in developing their own style, bringing more of everything they presented on previous albums.

Now, what ingredients does Le Tyran Et L'esthète consist of? First of all it's a kind of concept album, with 'Ouverture' as an opening and quite long closing track (over 5 minutes), 'Sabordage Du Songeur - Final', with an ominous choir closing this impressive full-length. The black metal presented here has everything I like - the epic moments are truly amazing, it's got furious blast beats and accompanying choir parts, which can definitely compete with the best tracks from Batushka, for example. Whichever Batushka you choose. They have progressive elements, which could easily be composed by Enslaved. The fast chords, which sometimes remind me of VI, could also fit Mayhem's album very well. And actually, to me Les Chants De Nihil is a kind of French Mayhem. Their compositions present the same high quality content - technical perfection, uncompromising fast black metal, with a bit of punky rawness, but also irregularity in rhythms, dysharmonic guitars and sometimes very unexpected clean vocals, jumping at you between shrieks, growls and howling. The only difference is brought by those unique French folk elements. And they have probably more catchy melodies, which get better and better with every album.

The sound production on this album is perfect. Considering how much is happening on this album it's quite an achievement to make every single riff sound so prominent, every bass line and choirs, keyboards and whatever else the band threw in that melting pot can be heard clearly and selectively.

I would probably recommend checking out the title track to check if it's something for you as it's probably the best representation of Jerry and Co.'s skills. Or you can try 'Ode Aux Résignés' which is probably the most catchy track, with the main melody line which is going to be my favourite earworm for the next few weeks. But, as I always do, I recommend listening to the whole album from the beginning to the end to catch that whole variety of black/death/heavy riffs, impressive vocals, ear-crushing rhythm section and arrangements that keep on surprising and impressing me every time I listen to this album.