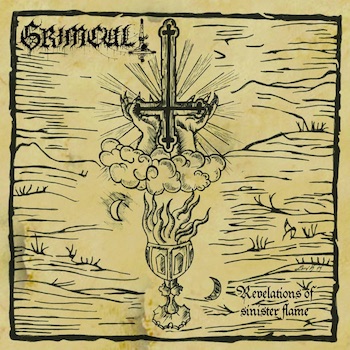 Maybe I'm a technocrat, but I think a piano intro two and a half minutes long is disproportionate on a mini-album with a playing time of less than 25 minutes. On the other hand, I also have to state that this first release of Grimcult itself is also too long - despite its rather meagre overall volume. As the colleague before me has already written correctly, one should not expect high-fidelity sound. But against the dull hum presented here, even Quorthon's second album shines with a differentiated, technically elegant guitar sound. (At this point, the R.I.P. for the much too early deceased Swede must of course not be missing.)

By the way: in terms of composition, Grimcult displays no obvious Bathory influences. The monotonous screaming voice relies on a mixture of despair, violence and hostility, the guitars lack dynamic riffs in places and especially Quorthon's feeling for catchy melodies and choruses remains a mystery with seven seals for the musician active here. Similar to the sound of the release, his compositions reach the quality of an above-average demo at best. But of course, the one conditions the other. A drum kit that would provide a massive drive would already be helpful. But here the snare sounds weak and wooden.

The one or other violent eruption increases my interest in Grimcult's art, but it mostly remains a short-lived pleasure. The songs seem too flat and too dull and even a good start like in 'Death Dream' cannot prevent that in the end also the energy of this song somehow gets lost in a big black hole. The pieces present pure and raw black metal that spits on external inspirations, but they lack coherence, impact and inner strength. I can't really extract any viable substance. Therefore, Grimcult unfortunately belongs to those names that give one-man projects a questionable reputation. In addition, Putrid Cult, for all the merits that the label has, especially for the Polish scene, should perhaps not sign every solitary artist who maltreats his guitar with the clumsy force of a lumbering Berserk and then calls the result black metal. A little more musical finesse is allowed. Otherwise the rehearsal room should be the natural biotope. And last but not least: offering an additional pointless outro of more than one and a half minutes certainly doesn't make the technocrat in me feel any better.