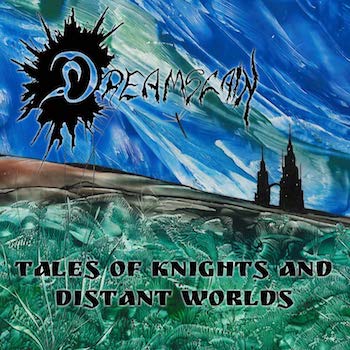 In case of Dreamslain I have a band in front of me of which I have almost no of information about except the promo info and their Facebook page. So, I can say that they come from Norway and have a penchant for epic lyrics centered around Lord of the Rings and other fantasy themes. They also have a preference for extreme Scandinavian metal, classical music and prog rock. Well, that seems to be a very colorful mixture to begin with.

Musically it has to be said that the band has a wide range of influences on Tales of Knights and Distant Worlds, so some things remind me of classic hard rock from the 70s (Uriah Heep, Hawkwind), many things remind me of Finnish metal like Nightwish or Children of Bodom and some passages remind me of old symphonic black metal bands (here Darkwoods My Betrothed came to my mind). But as it is so often, much does not always help much....

The songs sound quite appealing in parts, but I often have the feeling that the band gets a bit lost. So the pieces (especially with the keyboards) seem a bit confused and it is sometimes quite exhausting to follow the pieces attentively. Also the singer sounds sometimes a bit crooked, maybe that's why the memory of Darkwood's my Betrothed... I don't want to say that the compositions are bad, but it's definitely not an easy listening album, but something you should listen to in peace.

Recommended songs are 'The Fall of the Elven Lord', which sounds quite varied and atmospheric, and 'Shadow Warriors', which starts like a cool folk song and develops in the course of one of the harder, almost black metal-heavy song, whereby I'm also reminded of the weird Naked City (if anyone still knows them).

Maybe Dreamslain should remember the motto "less is more" on their next album and not incorporate quite so many influences into their songs. All in all, an acceptable album, which could have had more potential.