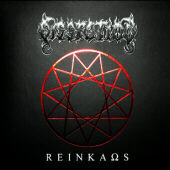 This album was a recommendation from a friend and the way he explained the album to me sounded way better than what I ended up hearing. He explained that this release dealt with some sort of deities based on a cult (the Misanthropic Luciferian Order, renamed to Temple of the Black Light) and that the leader of the band committed suicide some time after releasing the album.

On the first listen, I was completely disappointed. While the concept sounded interesting by itself, the music sounded very simplistic and dull to catch my attention. I left it there for some time and then I decided to listen to it again. Like some other albums, this release might require subsequent spins to actually "get it". After that, I can pretty much say that it is still a very simplistic type of music, but it's not as bad as I initially thought.

The job done by every member of the band is really good. The guitars are heavy, yet melodic, and many of the riffs delivered are actually catchy ('Beyond The Horizon' is the best example). The bass it's audible, even if it's a bit buried under the whole music. And regarding the vocals by Jon, I have to admit he nails it. The voice is really fitting for the music, sometimes using other vocals techniques in certain tracks to add to the atmosphere. My only complaints would be that the drumming is very simplistic, which is a bit bothering since the drummer could've tried some more variety to create a greater atmosphere. And some songs sound very repetitive and lame (like 'Dark Mother Divine').

I've seen that this release by Dissection is polarizing. Some people love it, some others despise it. I find myself in the midst of both groups. The album is not what everyone expected from Dissection (considering how good their previous albums were) but in all honesty, this album is not the worst thing I've heard.

Overall, it's a catchy, powerful, melodic record with a great concept, but it's not something I'd listen to every day.

There are two ways to review this album. One, rip it to pieces, defecate on it and wipe an ass with its cover for not being Dissection of old and two, treat it like a regular new release and forget about the band's past. Since almost everyone in metal world went with choice Nr. 1 I'll try to take a look at it from a second angle. "ReinkaΩs" is simply a melodic death metal record with strong satanic lyrics that feel almost like a main part of the album with music there just to help serve the message. By saying that, I have to admit that except few really good riffs and couple solos, most of the tracks are your typical melodic death that wouldn't really stand out from the crowd if it wasn't for Jon Nödtveidt's voice. Catchy choruses and almost rock/heavy influenced melody lines and even female vocals on last track, make this album much less extreme than what today's scene has to offer but at this same time "ReinkaΩs" is a pleasant piece of music that can stay in your head for days if you're not into blastbeats (or old Dissection – I couldn't resist).