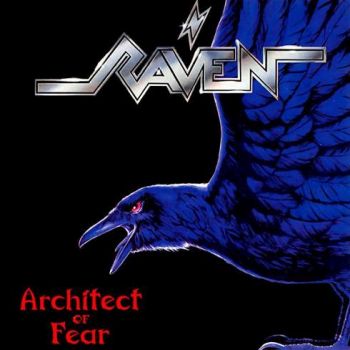 To disclose it right at the beginning, I'm not very familiar with Raven's complete oeuvre, which has been growing permanently for 40 years. The band may have its merits, but everything I know of them breathes the spirit of averageness, sometimes more, sometimes less. The Gallagher brothers' butts have been scuffing the upholstery of the chairs in the second row for four decades, and they only get up when one of their neighbors, Anvil, needs someone to pee. But it doesn't matter, because at least Architect of Fear has a few good-class tracks in its program.

This is not to say that the 1991 album is a firework of inspiration. Architect of Fear doesn't sound timeless, but rather old-fashioned - and that was already the case at the time of its release. If it weren't for the clean, relatively sharp-edged production, one could also speak of somewhat dusty compositions. Raven wallows in the medium tempo, it seems as if they don't dare to press the gas pedal properly. The conventionally held pieces do not steer leisurely, but also without excessive haste to the chorus, which seems to be chiseled in stone and iron as a natural climax. So that you do not miss it, often quite shrill background choirs join in and support John, who is also not completely averse to petty shrill screams.

But regardless of such trifles, the trio knows how to present some catchy choruses. These are mostly very simple ('Disciples', 'Part of the Machine', 'Blind Leading the Blind'), but they don't miss their effect. The riffs are also not objectionable. They lack any glamorous charisma, but that's not surprising in this traditional form of our favorite music. Instead, they reveal a metallic core, and that is much more important. Still, if I am to be honest, there are too few rousing moments on this disc. It lacks moments of tension and at least a small dose of its own personality. The nearly eternally same tempo promotes a certain monotony (only 'Relentless' crosses the territory of speed metal) and the vocals also suffer from uniformity. Finally, outstanding melodies do not appear.

A typical semi-ballad ends the record, also in this respect Raven stay true to the metallic guidelines of their time and genre. However, what remains are small highlights like 'White Hot Anger' or the above-mentioned pieces on a record without embarrassing failures, but also without real smashers. The intro promises "something wonderful", but even almost 30 years after acquiring the record I don't really know what is meant by that. Maybe a fan of the NWOBHM who is getting on in years can explain it to me on occasion.