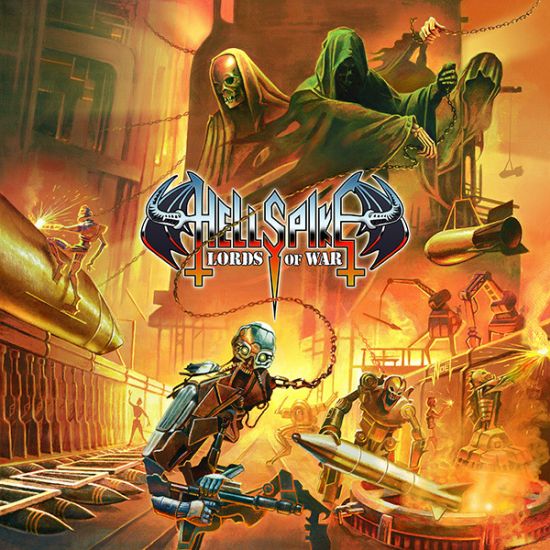 Hellspike greet from Portugal, a country that lies so far in Western Europe that it is sometimes almost overlooked. It would be a pity, however, if Hellspike would also meet this fate, because immediately with the first notes of the calm guitar intro of 'Titans' Clash' it becomes clear that these guys are able to create expressive harmonies. The introduction slides over into an honest metal song that offers traditional elements as well as components of speed and power metal. And in order not to make a secret of it: you have to know that the debut of the three gentlemen is less martial than its name.

The record shines with a powerful, well thought-out production that gives the trio's lively compositions an additional kick. Musical approach and technical realization bring songs like 'House of Asterion' close to some medium-hard Destruction songs. Or is it because of the voice, which avoids the high screams of Schmier, but sometimes sounds similar to the organ of the frontman of the German thrashers? In any case, singer Rick Metal - what a coincidence that his name is Metal! Surely a typical Portuguese name - doesn't really lack depth or charisma and therefore I'm a bit surprised that two instrumentals appear among the eight tracks of the debut.

Those who know and like the music of the Colombian Revenge will probably also be able to take Lords of War to their hearts. I must admit that not all pieces are sensational, spectacular or groundbreaking. One does not need superlatives to describe the music. 'Fallen Empire', for example, is a good piece of heavy metal that you can listen to, but don't have to. But the album has substance, the songs don't suffer from unnecessary repetition and the band has avoided stretching the record with lukewarm fillers. The epic title track provides the best argument for the band, because it is bursting with vitality, power and energy. Unfortunately, the following instrumental cannot keep up the level. It rather degenerates into a lesson for guitar students. Hellspike should consider sacrificing such excursions for the second work in favour of "complete" songs.

I mentioned Destruction, but old heroes like Judas Priest certainly play an even bigger role in the influences of the band. Hellspike continues the archaic battles with modern means and they skillfully use their weapons. No song falls through the rust and even the sometimes mild 'Stellar Victory' is a contribution worth hearing at the end. In short, the Portuguese are not presenting an album that begs for consensus at any price. Nevertheless, the vast majority of metal fans should be able to get something out of this release.